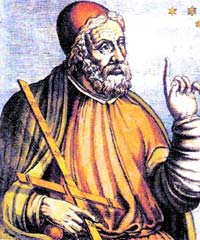 Ptolemy and the Greek Influence

The Greeks, in the 300s BC, were aware that the earth was a sphere.

Claudius Ptolemy (c.100-168) was the most influential Greek astronomer and geographer of his time. Born in Egypt, he compiled information on other lands and the earth in general. He wrote many important books about mapping.

Ptolemy did a lot of research at the great library of Alexandria in Egypt where documents from writers, geographers and mathematicians who had come before him were stored.

He produced all the information for creating a map of the world around 150 AD. He based his map on his own research and the reports of Roman officials and governors, such as Agricola, who sailed around Britain.

Though extremely useful, many of his maps were inaccurate and distorted as there was not enough information at the time, particularly about places outside the Roman Empire.

Ptolemy's work was lost to the West until the Renaissance when his writings, rather than his maps, survived. People who constructed maps in the fifteenth and sixteenth centuries recreated the maps of Ptolemy by following the notes and writings in his books. Look at the map below from 1503 which was based on Ptolemy's writings

Between 500 and 1100 AD, or the Early Middle Ages, Europe descended into the Dark Ages. During this time the Arabs led the mapping world in terms of accuracy and detail. See the image below to take a closer look at a Moroccan map from 1154.

During the middle ages, or medieval period, it was traditional to draw maps with a religious perspective - Jerusalem was often shown as the centre of the world. As the Vikings explored in the Atlantic, discovering Iceland, Greenland and America, some of their discoveries were incorporated.