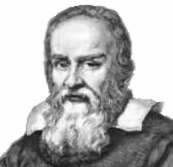 Galileo said all objects fall at the same rate. He was the first real scientist, because, unlike Aristotle, Galileo used experiments and observations to find things out. (The ancient Greeks were the first scientists: they thought and argued, but they did not test things out by doing experiments). Galileo tried out theories by testing them. He was a very clever person and he even invented the first telescope.