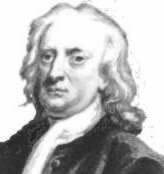 Isaac Newton said that his theory of gravity was inspired by seeing an apple fall from a tree.

Isaac Newton had to leave Cambridge , where he was studying, because it closed. Like London and other cities in 1665, Cambridge was full of rats, which were full of fleas which were full of plague, and thousands of people were dying every day. So Isaac went home to Lincolnshire , where he sat in an orchard.   He was one of the greatest scientists of all time. Even though Isaac was a brilliant as a scientist, he did not excel at school or College.