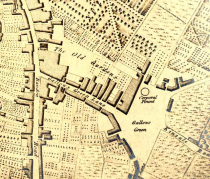 Cork is a very old city with a fascinating history. The eighteenth century saw an enormous growth in Cork's population. This was because the city became more prosperous through trading in beef, pork, butter, textiles and other goods.

During the eighteenth century, as Cork expanded, several river channels were filled in to form the city centre. For example, Patrick Street and the Grand Parade were originally streams. By 1790, the city centre as it exists today was formed.

Despite the prosperity and growth in Cork, there was a large gap between rich and poor. Poverty was widespread and food riots were common. Drunkenness and crime were the result of the poor living conditions of much of the city's population.

Here we will explore aspects of the commercial activity that made some people in Cork city prosperous in the eighteenth century. We will also take a look at what life was like for the majority, who were the poorer members of Cork's population at the time.