Society and Customs in 1600

Gaelic society, up until 1603, revolved around the laws of the 'Tuath' and the 'Brehons'. English law around 1500, had been confined to the 'Pale' (Dublin and the East coast). King Henry VIII during his reign, had given lands that had once belonged to Irish chiefs and their families to English settlers.
The English settlers had brought with them the Feudal System of land tenure, which replaced the old Irish laws in many parts. But the Brehon laws and traditions still carried on underground in Irish society.

By 1603, King James I ended the Brehon law's authority by announcing a proclamation that Irish people were now under his protection and that the country would be divided in counties ruled under English law.

The culture and customs of Irish people were traditionally celebrated by the great institution of the Irish bardic poets. They sang of heroes and love, everyday life, and battles against the English. 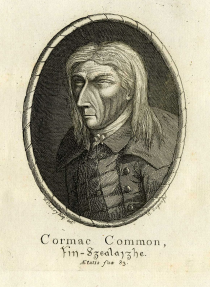 This is an illustration of Cormac Common or 'Blind Cormac' as he was known in the 1700's. He was one of Ireland's greatest bards and storytellers.

This is an illustration of Cormac Common or 'Blind Cormac' as he was known in the 1700's. He was one of Ireland's greatest bards and storytellers.

These poets were highly respected by the local people who listened to their poetic tales and were inspired by what they heard. Rich lords (patrons) would hire these bards to write a poem attacking one of their enemies, which shows how powerful their words were seen to be.

But by 1600, the tradition of bardic poetry had changed as there were less rich patrons around. This was made even worse by the 'The Flight of the Earls' in 1607, in which a large number of Irish chief's left Ireland. Many bards had to resort to working on the land to survive, ending the long history of the professional bardic poet.