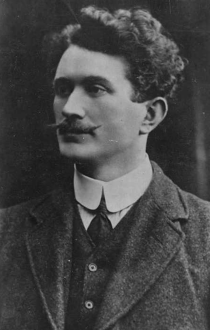 A portrait of Thomas Ashe, which was printed as a postcard.

A portrait of Thomas Ashe, which was printed as a postcard.

Courtesy Fingal County Libraries.
Enlarge image
Thomas Ashe was born in Kinard, Co. Kerry, in 1885. He was one of a family of ten children. He grew up with a great sense of patriotism and a desire for Irish independence. Having studied to become a teacher, in 1908 he became Principal of Corduff National School near Lusk.

From a young age, Ashe worried about inequality in society. Growing up in Kerry, he saw small tenant farmers struggle against landlords. In Dublin, he witnessed the harsh conditions in which many poorly paid workers lived.

Ashe became an officer in the Irish Volunteers in 1913. He met many people in this organisation who had similar concerns to him. He led his men on military exercises and prepared them for battle. 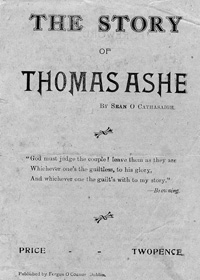 The Story of Thomas Ashe

The cover of a fourteen-page pamphlet written by Seán Ó Cathasaigh, published to commemorate the life and death of Thomas Ashe.

The Story of Thomas Ashe

The cover of a fourteen-page pamphlet written by Seán Ó Cathasaigh, published to commemorate the life and death of Thomas Ashe.

Courtesy Fingal County Libraries.
Enlarge image
Ashe was elected commandant of the Fifth Battalion of the Fingal Volunteers early in 1916. When the Easter Rising began, he received instructions to mobilise his troops. Their job was to destroy enemy communications in North County Dublin. Their first task was to blow up Rogerstown Bridge on the Great Northern Railway between Dublin and Belfast.

Next, they took over a number of barracks in North County Dublin and cut telephone lines. Within a few days, Ashe and his men controlled most of Fingal.

The Friday after the Rising began, Ashe and his men attempted to capture the army barracks in Ashbourne, Co. Meath. They succeeded in doing so, and held it even after reinforcements arrived from the barracks in Navan. A week later, the Republican forces in Dublin surrendered and orders reached Ashbourne that the Volunteers were to lay down their arms.

The firing party at the grave of Thomas Ashe, September 30 1917. Thousands of people from all over Ireland turned out for the funeral.

The firing party at the grave of Thomas Ashe, September 30 1917. Thousands of people from all over Ireland turned out for the funeral.

Ashe was imprisoned and sentenced to death. The sentence was later changed to penal labour for life, and Ashe was sent to prison in England. However, within a year, the British Government decided to release all Irish political prisoners.

When Ashe returned to Ireland, he travelled the country making political speeches. He was arrested after speaking at a meeting in Dublin and sent to Mountjoy Jail.

Irish Republican prisoners went on hunger strike on September 20 1917 in order to be recognised as political prisoners. Thomas Ashe was among those who refused food. Just five days after the strike began, Ashe died in the Mater Hospital due to complications resulting from being force fed. Tens of thousands of people attended his funeral.