Galway city and county have produced some of the best known writers in the Irish language.

Pádraic Ó Conaire was born in the city in 1882. Orphaned at the age of 11 he moved to Rosmuc, in the Connemara Gaeltacht, to live with his uncle. He was later sent to boarding school in Dublin and eventually moved to London where he worked as a civil servant. 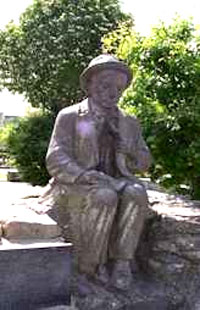 It was while in London that he began to write seriously. He was the first to write in the modernist style in the Irish language. The novel 'Deoraíocht' (1910) is one of his most famous works. Secondary school students often study his short stories 'M'Asal Beag Dubh' and 'An t-Adh'. He died in Dublin in 1928.

For many years a stone statue of Ó Conaire stood in Eyre Square and was a famous landmark. It was moved indoors to the Galway Museum in order to protect it from the elements.

Máirtín O Direáin was born on Inishmore, the largest of the Aran Islands, in 1910. He took up a position in the postal service in Galway in 1928. Whilst living in Galway, he acted in plays in An Taibhearc, the Irish language theatre.

Ó Direáin moved to Dublin in 1938 and it was around this time that he began to write poetry. He published his first two volumes, at his own expense, in the early 1940s. Many of his early poems tell us that he missed his native Aran. He went on the publish many more volumes of poetry and achieve international recognition. Like O Conaire, his writings are still studied in schools in Ireland today.