Richard Martin was born in Ballynahinch, Co. Galway in 1754. He was brought up at Dangan House just four miles from the town of Galway. The Martins were one of the Tribes of Galway. They owned one of the biggest estates in all of Great Britain and Ireland. They owned much of the land in Connemara. 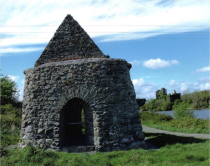 The Tea House Folly lies in the former estate owned by the Martin Family in Galway. It was used for taking tea on the shores of Lough Corrib. The castle in the background is Menlo Castle, ancestral home of the Blake family.

The Tea House Folly lies in the former estate owned by the Martin Family in Galway. It was used for taking tea on the shores of Lough Corrib. The castle in the background is Menlo Castle, ancestral home of the Blake family.

Tea House Folly, Galway Richard was sent away to school in England. His father wanted him to become a member of parliament. He was elected to represent County Galway in Parliament in 1800. He was very popular with people in Galway and was well known as a duellist and as a witty speaker in the houses of Parliament. He campaigned for Catholic Emancipation. He is best remembered for his work to outlaw cruelty to animals.

He earned the nickname "Humanity Dick" because of his compassion for the plight of animals at that time.

Campaign Against Cruelty to Animals

Richard Martin is famous for campaigning for animal rights. Through his work the "Ill Treatment of Cattle Bill" was enacted in 1822. This was the first piece of legislation which aimed to protect animals from cruelty. Most people did not recognise animal rights in those days and Martin was often made fun of. Cartoons of him with donkeys' ears appeared in the newspapers of the day.

After having the Bill passed by Parliament, Martin actively sought out cases where cruelty was being inflicted on animals on the streets of London. He was responsible for bringing many people to court for cruelty against horses. Martin often paid half the fine of the accused in cases where the accused could not afford it and seemed genuinely sorry for his actions. A year after Martin's death in 1834, the Act was extended to cover cruelty to all domestic animals.

Why is He Remembered Today?

Richard Martin's work continues today. The RSPCA now has members all over the world. In Ireland we know it as the ISPCA (Irish Society for the Prevention of Cruelty to Animals). Many other groups have been set up which protect animals from cruelty.