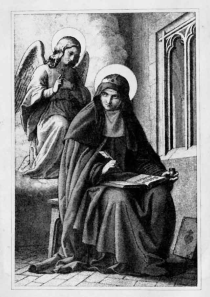 Brigid is one of Ireland's earliest recorded saints, and along with St. Patrick, one of our most famous. It is thought she was born sometime between 452 and 456 AD in Faughart, a few miles from Dundalk in Co. Louth.

Brigid's father was a wealthy chieftain named Dubtach. Legend has it that she caused him great annoyance with her generosity, giving away his valuable goods to the poor and needy. It is thought by some that Brigid's mother, Brocseach, was a slave in Dubtach's household.

Eventually, Dubtach became so frustrated with his daughter's behaviour that he decided to try to remove her from his household. He approached the King of Leinster and offered to sell Brigid to him. However, while Dubtach was negotiating the deal with the King, Brigid, who was waiting outside, managed to give away her father's valuable sword to a beggar.

When the King learned of what she had done, he decided she might be a nuisance to his household. Admiring her courage and persistance, he granted Brigid her freedom. Brigid is thought to have died on 1 February 524 when in her early seventies. Her feast day is celebrated every year on the first day of February.