Origins of the Flame

The 'ever-living' fire was associated with the fires of Vesta which were pagan. The fires were kept alight in the temples honouring the Goddess Vesta in Rome, it was not easy to get fire at that time as it was before matches were invented!

The need for fire for cooking and heat, ment that fires were kept burning in the home and by the state. It could have been the importance of fire to everyday life which led to the worship of the Goddess Vesta.

Some historians have suggested that ritual fires were burned for ceremonial purposes on the Hill of Kildare in Pre-Christian times. 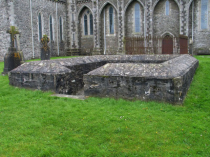 The fire was considered to have been for the use of the poor and the traveller. St. Brigid is said to have continued this tradition and a fire was kept burning day and night in the grounds of the Abbey. It was believed that the 'ever-living' fire had special properties which let it be used for protection.

After St. Brigid died the fire was kept alight in her memory. On the evening of the twentieth day wood was thrown onto the fire by one of the religious women who said “Brigid it is your turn to mind the fire”, however it is said that the fire was still burning the following morning.

The curse of the fire

The ever-living fire was kept burning in a cell and was surrounded by a circular fence made of twigs, within which no man was permitted to enter.

An archer went into the circle and blew on the fire, he got so worked up that he went around blowing on people's faces saying “you have been breathed on by the breath which breathed on the everlasting fire”.

The man's friends took hold of him and got him to drink some water to quench his thirst, he drank the water it was not enough to save him.

A man who tried to go in to the circle was pulled back, by his friends, as he placed his foot into the circle. His foot and leg are said to have withered.

Tradition of the Ever-living fire restored

The fire is thought to have been kept burning until sometime in the sixteenth century.