Kilkenny Castle is a 12th century castle found in the middle of Kilkenny City. Strongbow originally built a wooden castle on that site overlooking the River Nore in 1172.

Around 30 years later, his son-in-law, the Earl of Pembroke built the first stone castle. Three of this castle's original four towers survive today.

After the seneschal (governor) of Kilkenny, Sir Gilbert de Bohun, died in 1381, Kilkenny Castle was put up for sale. It was bought by James Butler, the 3rd Earl of Ormonde. 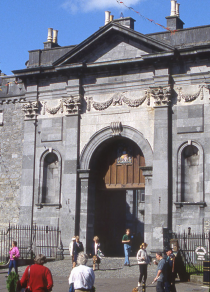 In 1661, Kilkenny Castle was remodelled as a "modern" chāteau by the Duke of Ormonde after his return from exile. A new entrance gateway in the south wall was built around this time.

In 1661, Kilkenny Castle was remodelled as a "modern" chāteau by the Duke of Ormonde after his return from exile. A new entrance gateway in the south wall was built around this time.

The Butlers of Kilkenny Castle were an Anglo-Norman family who came to Ireland in 1171 in the first wave of the Norman invasion. They had become quite wealthy and by buying the castle, James Butler became ruler of the area.

The Butler Family remained in control of the castle for the next five centuries. However, it wasn't all plain sailing for them.

In the 17th century the castle was shortly occupied by the Catholic rebel movement, Confederate Ireland. In 1650, the castle was badly damaged by Cromwell's men as a result. In 1661, the castle was rebuilt because of all this damage and a new gateway was designed for the south wall.

By the 18th century, the fortunes of the Butler family decreased and the castle became run down. It was rebuilt in the 19th century with extensions to the main building as well.

On the 2nd May, 1922, the castle was occupied by republican forces during the Irish Civil War. After a two day siege and lots of damage to the castle, it was restored to the Butlers.

In 1935, the Butlers decided to leave and a great auction was held in the castle. For five days all the contents of the castle were auctioned off and the castle remained in the hands of the family until 1967.

Then, Arthur Butler, 6th Marquess and 24th Earl of Ormonde, sold the castle which was in a bad state to the Castle Restoration Committee for £50. He felt that

"The people of Kilkenny, as well as myself and my family, feel a great pride in the Castle, and we have not liked to see this deterioration. We determined that it should not be allowed to fall into ruins. There are already too many ruins in Ireland."