Kilkenny has always had an important place in the literary, artistic and cultural life of Ireland. In particular, it had a thriving period of theatre in the 1800s that attracted worldwide attention.

According to P.M. Egan in his Illustrated Guide to the City and County of Kilkenny (1884):

"Some of the brightest scenes, the gayest assemblages, the most fashionable of audiences, the foremost galaxy of wit and taste ... were experienced at Kilkenny during the halcyon period of its theatre."

During the late 1700s, it became very fashionable for wealthy people to have private theatricals or plays performed at their houses. The popularity of this led to the formation of amateur acting companies, such as the one formed by Sir Richard Power in Kilfane. This company became so successful that it opened a public theatre in Kilkenny in 1802 called The Athenaeum. Most of its profits were donated to charitable organisations in the area. 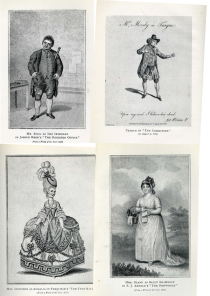 These illustrations depict actors who were famous in Ireland in the eighteenth and nineteenth centuries. These were the celebrities of their time.

These illustrations depict actors who were famous in Ireland in the eighteenth and nineteenth centuries. These were the celebrities of their time.

The theatre was an international success, right up until its closure in 1819. Every year the city would host a carnival, which was like an arts festival today. People from far and wide would come to the city during this time just to catch a performance at the theatre. This theatre also attracted famous actors at the time, such as Miss O'Neill and Thomas Moore, who would perform plays by Shakespeare and captivate audiences.

Although The Athenaeum closed in 1819, Kilkenny's love of theatre continued. Actors continued to perform anywhere there was an audience, such as in schools, under the Tholsel, in empty sheds and in market squares. New theatres were eventually set up, such as the Kilkenny Theatre in 1902, and in recent years, the Watergate Theatre.