The Irish landscape was very different in 1563. Laois, like much of Ireland, was covered in dense forests and treacherous bogs. They provided an ideal habitat for numerous wild animals.

At this time, wolves were still present in the wild in Ireland. The population of hawks was much greater than now and they were exported for use in the practice of falconry.

Though much of Ireland was covered in forests and bogland, at around 1 million, the population was much lower than it is today. The land available for cultivation provided enough to support the population, with some remaining for export. In fact, some commentators at that time remarked that Ireland was 'most rich, and plentiful, full of corn and cattle.'

Wool, hides, tallow, honey and fruit were all in general use, with a large surplus available for exportation. Corn and other cereals were a valuable source of income. Cattle and horses were also exported.

Hunting was a popular pastime among the Irish chiefs and the English gentry. The forests provided a stock of wild animals and an abundance of small game. Irish wolfhounds, like the one pictured below, were used in hunting. 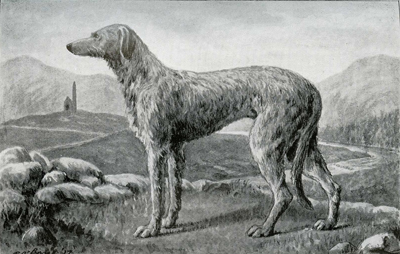 A drawing of an Irish wolfhound. The Irish wolfhound has a strong place in legend. It is the tallest breed of dog in existence and has the speed of a greyhound.

A drawing of an Irish wolfhound. The Irish wolfhound has a strong place in legend. It is the tallest breed of dog in existence and has the speed of a greyhound.

Wolfhounds were so popular that special laws were passed to protect them. Hawks were also popular for use in falconry. As so many wolfhounds and hawks were exported as gifts to gentry abroad, a tax was introduced to discourage the practice.