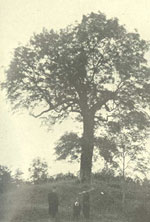 During the sixteenth and seventeenth centuries, laws were passed that made it difficult for Catholics to practice their religion. These laws were called the Penal Laws. They meant that Catholics had to gather in secret to attend mass.

Mass stations, as they were known, were often found outdoors in fields under the shelter of a tree or bush. Sometimes a pit was dug into the earth in order to create a well-hidden mass station.

Here is a photo of Clonaghadoo mass station near Mountmellick. As you can see, it was located underneath a tree. The tree gave shelter and helped to hide the congregation from troops of soldiers who were on the lookout for people taking part in an illegal activity.

There were many more mass stations throughout Queen's County. Let's find out a little more about them.