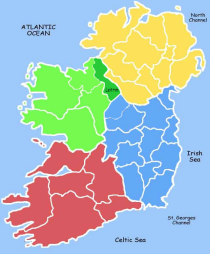 County Leitrim is one of five counties that make up the province of Connacht.

It shares a border with 6 other counties. It is bordered by Sligo to the west, Roscommon to the southwest, Longford to the south, Cavan to the east, Fermanagh to the northeast and Donegal to the north.

It is almost divided in half by its largest lake, Lough Allen. The county is mostly inland, with a very short coastline of about 5km.

Leitrim has the smallest population of any county in Ireland. According to the 2006 Census the population is 28,950. However, this represents a significant increase in the county's population since the last Census in 2002, when the figure was only 25,799. This shows a 12.2% rise, and this is mainly due to the increased population of Carrick-on-Shannon.

Down through the years, life in Leitrim has reflected life in much of rural Ireland. In this section we will look at some aspects of everyday life in Leitrim in the past and in the present.