The army of Medb began its march to Ulster to capture the famous bull. Due to the Ulster warriors suffering from the pangs of Ulster, the whole province had just one 17-year-old man, Cúchulainn, to defend it against thousands of soldiers.

The army made its way into Ulster unopposed. However, once there, it was terrorised by Cúchulainn. Every day, he killed hundreds by picking them off with his slingshot. He killed more by hunting down stray troops. 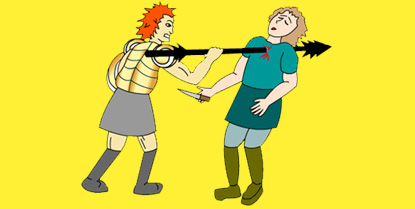 Medb became very anxious. She offered Cúchulainn money, land and women to convince him to change sides, but he refused.

Instead, he promised to stop attacking the army if they sent one warrior to fight him every day and if Medb would agree not to take any cattle, nor move position, until he was beaten. Medb agreed. No matter how fierce Cúchulainn was, she thought she could surely find someone in Ireland who could beat him.

Cúchulainn defeated every warrior that appeared before him. Soon Medb found that she was running out of men who were willing to take him on. She was forced to ask Cúchulainn's own stepfather, Fergus, to fight him.

But when Fergus got to the battlefield, he found he could not fight his own stepson. Cúchulainn agreed to yield on condition that Fergus agree to return the favour at another time in the future. 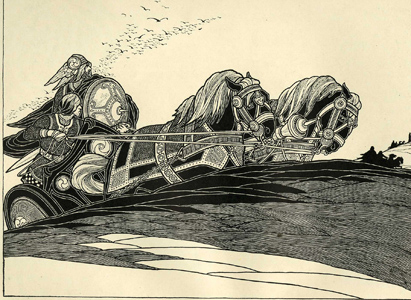 Above is an illustration from 1907 of Fergus on his way to meet Cúchulainn. Each warrior had a chariot and a chariot driver to take him to battle.