As the battle between Ulster and Connaught raged, Cúchulainn could not stay resting for long. He soon threw off his bandages and dashed to the battlefield.

He approached his stepfather Fergus and demanded he yield, as Fergus had promised when Cúchulainn had yielded before. Fergus agreed and deserted the battle with his 3,000 troops, leaving Medb and Ailill to fight on alone.

Realising now that she could not win the battle outright, Medb sent the great Bull of Cuailnge on the journey back to her kingdom in Cruachan, with fifty of his heifers and eight messengers. Then she and Ailill retreated back to Connaght too. The battle was over, and though Medb had lost many soldiers, she thought she had at least secured the bull. 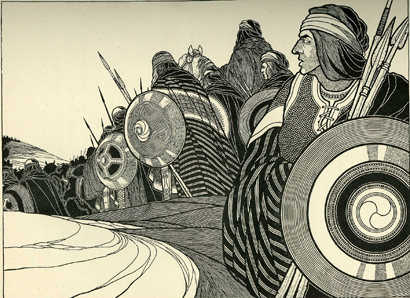 The picture above was drawn in 1907. It portrays Cúchulainn guarding the retreat of the men of Ulster after the battle. Notice how different artists like to portray Cúchulainn.