Ulster Rises from its Pangs 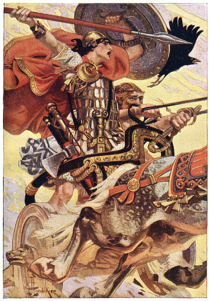 Painting of Cúchulainn, by J. Leyendecker, 1916

Cúchulainn was so spent and sad after his defeat of Ferdia that he retired to get some rest and healing. He had done an excellent job of defending Ulster. He had stopped Medb's progress, slaughtering thousands of her warriors.

Although she had actually managed to find the brown bull and get him to her camp, Medb was still trapped in Ulster. Just in time, the men of Ulster began to recover from their pangs. Everything was building towards a final battle to decide who would win back the bull.

The battle involved all of the most accomplished warriors in Ireland, both men and women. King Conchobhar of Ulster, Fergus, Medb and Ailill all fought in it. 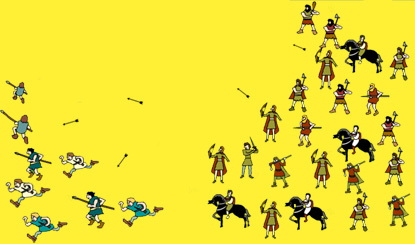 Due to his need to recover from his own battle, Cúchulainn could only listen from his bed to the mighty roars of his two stepfathers, Conchobhar and Fergus, as they fought against one another.