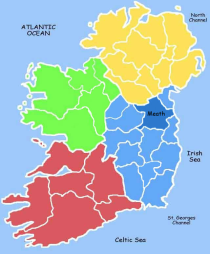 Co. Meath is located in the east of Ireland in the province of Leinster. In ancient times, Ireland was divided into five provinces of which Meath, or Mide (the middle kingdom) was the fifth province. Meath is also sometimes called the 'Royal County', as it was the seat of the ancient Celtic High Kings of Ireland.

Meath is bordered by Dublin, Kildare, Offaly, Westmeath, Cavan, Monaghan and Louth. It has a 12-kilometre strip of coastline in the east. The well-known seaside towns of Bettystown and Laytown are popular with local families.

The main towns in the county are Navan, Kells and Trim. Although Navan is now the county town, historically Trim held that title. Navan is the administrative centre, while Trim and Kells are classed as heritage towns.

In this section, we will look at some aspects of everyday life in Meath, both past and present.