The Irish Language in the 19th Century

Decline in the Irish Language 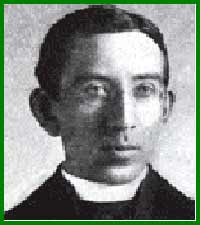 Fr. Eugene O'Growney was born in Ballyfallon, near Athboy, in Co. Meath. He was one of the founders of the Gaelic League. He died in Los Angeles in 1899.

Fr. Eugene O'Growney was born in Ballyfallon, near Athboy, in Co. Meath. He was one of the founders of the Gaelic League. He died in Los Angeles in 1899.

By the time O'Growney was born, the Irish language was already greatly in decline.

The Famine and emigration had a devastating effect on the numbers of people who used Irish as their first language.

A state system of primary education was introduced in 1831 and one of its main aims was the teaching of English. Children were strongly discouraged from speaking Irish.

The "tally stick", or "bata scoir" in Irish, was introduced into classrooms. Children attending school had to wear a stick on a piece of string around their necks. Each time they used Irish, a notch was cut into the stick. At the end of the day, they would be punished according to how many notches they had on their stick.

English was the official language of the country and as such was the language used for official matters. It was necessary for people to be able to speak and understand the language. Also, as great numbers of people were emigrating to England and America, it was more useful to speak English in order to secure a job.