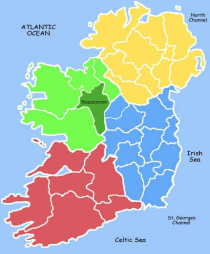 A map of Ireland, highlighting Co. Roscommon in dark green.

A map of Ireland, highlighting Co. Roscommon in dark green.

In this section, we'll be largely concentrating on the relationship between County Roscommon and the River Shannon. Firstly though, we'll have a brief look at the geography and population of Ros Comáin.

Roscommon is one of five counties that make up the province of Connacht. It shares a border with Galway to the southwest, Mayo to the west, Sligo to the north, Leitrim to the northeast, Longford and Westmeath to the east and Offaly to the southeast.

The county is 2,547 kms squared in size and is close to 100 kilometres in length, from Arigna in the north to Shannonbridge in the south. One third of Roscommon is bogland, while the remaining arable land is used for the raising of cattle and sheep.

County Roscommon accounts for close to 12% of the population for the whole of Connacht. There are also more males (30,178) than females (28,590) living there at present.

Roscommon and the Shannon

Co. Roscommon is the only county in Connacht without any sea coast. However, there is no shortage of waterways in the county.

Roscommon forms the west bank of the River Shannon for almost one third of its total length. It has the longest stretch of the Shannon of all the ten counties the river passes through.