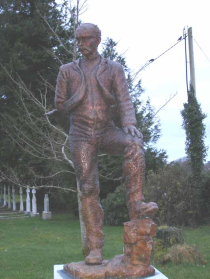 A memorial statue of Douglas Hyde in Roscommon.

A memorial statue of Douglas Hyde in Roscommon.

As a privileged Anglo-Irish youth, Douglas Hyde had a keen interest in prose, poetry and plays in both Irish and English. He attended Trinity College Dublin from 1880. Despite attending no lectures for his first two years there, preferring to study at home, he was an award-winning student. He won the Gold Medal for Modern Literature for his brilliance in the area of languages. He was awarded his B.A. in 1884. Hyde later returned to Trinity to study both divinity and law. Though also a distinguished student in these subjects, his first love remained languages, and the Irish language in particular.

Hyde published a large volume of verse in Irish from a young age, publishing under the pen name An Craoibhín Aoibhinn, meaning 'delightful little branch'. He also collaborated with several of the Celtic Revival writers, such as W. B. Yeats. He published bilingual anthologies such as Beside The Fire (1890) and Love Songs of Connaught (1893) in an attempt to preserve the Irish language. Both books had a huge influence on Irish literature and folklore studies.

Hyde became the first Professor of Modern Irish in University College Dublin in 1909, and held the position until his retirement in 1932. In 1937, he was unanimously appointed first President of Ireland, and remained in that office until 1945. 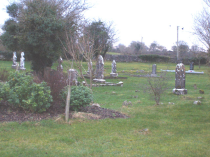 Douglas Hyde is buried in Frenchpark graveyard, along with other members of his family including his father, the Reverend Arthur Hyde Jr.

Douglas Hyde is buried in Frenchpark graveyard, along with other members of his family including his father, the Reverend Arthur Hyde Jr.

Hyde died in Dublin on 12 July 1949. He had a State funeral, and an Anglican service in St. Patrick's Cathedral.

Leading politicians stood outside the cathedral, as the Catholic Church forbade its members from attending non-Catholic services at that time. Hyde's remains were then taken across Ireland by motorcade before being buried in Frenchpark, Roscommon.