In July 1893, Douglas Hyde was joint founder, with Eoin MacNeill, of the Gaelic League, which in Irish is Conradh na Gaeilge. He was President of the organisation until he resigned in 1915.

The purpose of the Gaelic League was to keep the Irish language alive and to preserve the Gaelic elements of Ireland's culture. The Gaelic League was open to those of all religious creeds, and in name was non-political. It took a broad approach, which included organising classes and competitions in Gaelic music, dancing, literature and games. It also encouraged Irish indsutry. Its newspaper, An Claidheamh Soluis, was very popular. 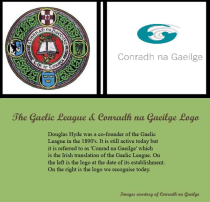 The Gaelic League established its first training college for Irish teachers in 1904, Coláiste na Mumhan, in Ballingeary in Cork. By this time, the League had 550 branches nationwide. Around this time, Hyde collected what was then an enormous sum of $64,000 on a fund-raising tour of the US.

The Gaelic League continued to grow dramatically in the early years of the twentieth century. Many Sinn Féin activists joined it. Sinn Féin was founded in 1905 and was a political organisation whose goal was an independent Ireland.

Although the Gaelic League was non-political, increasingly it became identified with these political goals, due to its membership. In 1915, a motion was passed by a large majority making an independent Ireland one of the goals of the Gaelic League.

Although a nationalist, Hyde resigned as President. Despite this, he accepted the will of the majority of members of the Gaelic League. He knew that the situation in Ireland at the time had made it inevitable that the League would become identified with revolutionary politics. Hyde remained a highly respected figure in Ireland, due to all the work he had done on behalf of the Irish language and Irish culture.