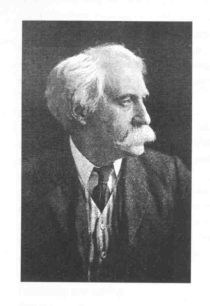 William Percy French was born at Cloonyquin, Co. Roscommon on 1 May 1854. He was one of nine children. He came from a family of landowning Protestants.

French displayed creative talent from an early age. When he was ten years old, he was sent to England to attend school. In 1872, he began a degree in Civil Engineering at Trinity College Dublin. During his time at Trinity, he began to develop his musical and artistic talents. Lack of focus on academic matters meant that it took him seven years to complete his degree.

While at Trinity, French wrote his first song called 'Abdullah Bulbul Amir'. The song was a satirical account of the Russo-Turkish War and it became a worldwide hit. French sold the song to a publisher for Ł5 but he was not credited as the writer at the time. As a result, he never received any royalties for the song.

This is a watercolour painting by Percy French. It depicts the mountains and bogs of Donegal, scenery that French loved.

This is a watercolour painting by Percy French. It depicts the mountains and bogs of Donegal, scenery that French loved.

After graduating from Trinity, French's first job was with the Cavan Board of Works as a surveyor of drains. During his time in Cavan, he began to develop his skill in watercolour painting. He believed that painting was his true vocation in life. Over the course of his life, he painted many scenes of the Irish landscape. These atmospheric paintings were exhibited many times both throughout French's life and after his death. His paintings are a part of many important collections, including in the National Gallery of Ireland and the Hugh Lane Gallery.

French was married twice. His first wife, Ettie, died in 1891 just a year after they were married. Their baby daughter died a few weeks later. In 1892, he married Helen Sheldon and they had three daughters - Ettie, Mellie and Joan.

Percy French died in Fromby, Lancashire on January 24 1920. Already in poor health, he had contracted pneumonia while touring.