In 1921 the island of Ireland was divided into two parts when the Anglo-Irish treaty was formed and the South of Ireland became independent of British rule. The South comprises of twenty six counties known as the Republic of Ireland who govern themselves. Northern Ireland comprises of 6 counties which is the Northern Ireland Assembly and the UK Parliament. There has been a long history of unrest between the two states however today there is a concerted effort to promote partnership and cooperation between the North and South where economic, social and cultural relations are nurtured.

The Republic of Ireland 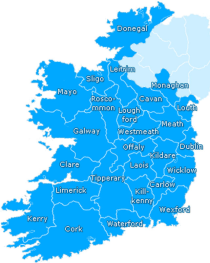 26 counties as the Republic of Ireland.

This map shows the 26 counties of the Republic of Ireland

26 counties as the Republic of Ireland.

This map shows the 26 counties of the Republic of Ireland

Ireland is run as a democracy and is governed by The President (The Head of State) who is elected by the Irish people in a general election. Ireland is also governed by the Oireachtas (Irish Parliament) which follows the laws set out by the Constitution and is led by The Taoiseach (The Head of Government). The Taoiseach also communicates all matters concerning the government to the President.

The main political parties represented in the Oireachtas:

The Oireachtas is divided into two houses of parliament, Dáil Éireann (House of Representatives) which comprises of 166 members or TDs ( Teachta Dála). The members are elected on a system of proportional representation by a general election. A general election to Dáil Éireann must be held at least every five years by law. The other house is Seanad Éireann (Senate) has sixty members, eleven of whom are nominated by The Taoiseach, the rest are elected by vocational panels and university graduates.

The Northern Ireland Executive is essentially the devolved government of Northern Ireland which exercises authority on behalf of the Assembly and makes decisions on economic and social matters, agriculture and rural development, culture, arts, education, health, social services and public safety. The committee consists of the First Minister and Deputy First Minister as well as ten ministers representing the government departments. The Assembly and The Executive were established under the Good Friday Agreement in 1998.