Oxides of nitrogen, mainly nitrogen dioxide (NO2), are formed when air is involved in high temperature combustion such as happens in power plants and in engines.  Nitric oxide (NO) is also formed but quickly oxidises to become NO2.

Nitrogen dioxide is bad for human health as it reduces lung function and increases the reaction natural allergens. Long-term exposure increases the risk of respiratory infection in children and, along with sulphur dioxide, it leads to the formation of acid rain as outlined above. 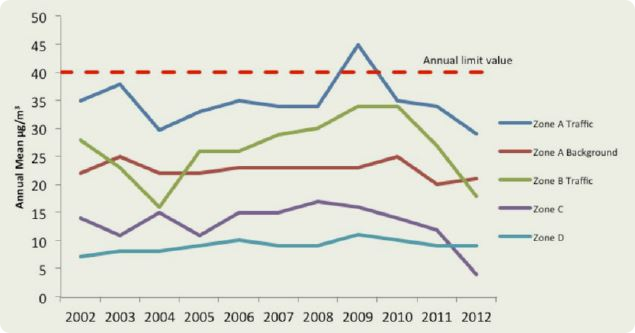 Trends in annual mean NO2 concentrations 2002 - 2012
Air Quality in Ireland 2012 (EPA, 2013)
The graph above shows annual average nitrogen dioxide concentrations recorded in urban and rural zones from 2002 to 2012. Zone A is Dublin, Zone B is Cork, Zone C represents 21 large towns and Zone D is the remainder of the country. There was little change in rural levels during these years, although while the levels in urban areas were getting close to the annual limit value they have dropped recently.  The higher levels in cities are due to emissions from vehicles and, if levels rise again and standards are breached, traffic may have to be restricted in some areas of city centres.