The Earth is surrounded by a thin envelope of gases called our atmosphere. This life giving bubble is consistes of numerous layers and is composed of a mixture of gases. Four of these gases are carbon dioxide, nitrogen, argon and water vapour.

The Earth is surrounded by a thin envelope of gases called our atmosphere. This life giving bubble is consistes of numerous layers and is composed of a mixture of gases. Four of these gases are carbon dioxide, nitrogen, argon and water vapour.

Most of the ozone found on earth is high up in the sky in the stratospheric ozone layer.  There it performs the very important function of protecting us from the sun’s ultravoilet radiation.  A small portion of the earth’s ozone is, however, found closer to the ground where it is formed by the action of sunlight on other air pollutants.

Ozone laden air can be transported over large distances and so some of the ozone measured in Ireland originates outside of the country and falls into the category of transboundary pollution.

High concentrations of ozone can cause various health problems, such as reduced lung capacity, bronchitis, asthma, headaches, and irritation of the eyes and mucous membranes.  It is a very reactive chemical and can cause damage to crops, to buildings and to materials such as rubber and plastic. 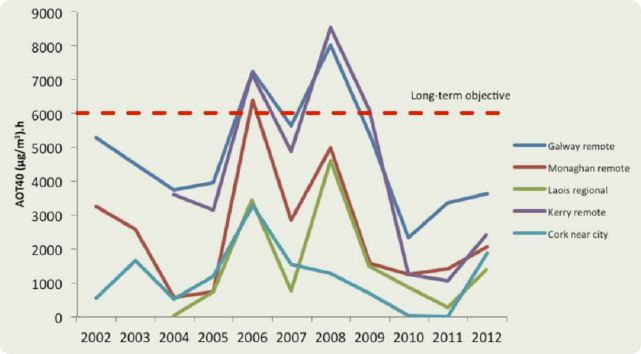 Ozone levels in Ireland are low in comparison to mainland Europe and are well below the thresholds for effects on human health and vegetation set down in regulations. The limit is 120 micrograms per cubic metre but the regulations allow for this limit to be breached 25 days in any year. In the long-term the regulations aim to reduce that allowance to zero.

The graph shows the AOT40 for five rural background stations for the years 2002-2012. The AOT40 is an indicator of exposure of vegetation to ozone during the growing season. AOT40 is the sum of the difference between hourly concentrations greater than 80 μg/m3 (40 ppb) and 80 μg/m3 over a given period using only the one-hour values measured between 8:00 and 20:00 Central European Time each day (EPA, 2013). The annual threshold limit is 6,000 μg/m3, and it can be seen that in 2006 and 2008 it was exceeded although it has since reduced quite significantly.

If levels for 1 hour exceed 180 micrograms per cubic metre then warnings are given in weather reports on radio and television to advise people with respiratory illnesses to stay indoors and to avoid strenuous work. This threshold is breached occasionally in Ireland when there is a combination of transboundary pollution and hot, sunny weather.