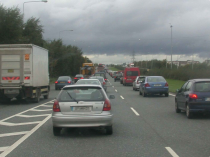 Every year, on September 22nd, we have a European Car Free Day. Across the EU, people are asked to take different types of transport like walking, cycling and public transport.

Every year, on September 22nd, we have a European Car Free Day. Across the EU, people are asked to take different types of transport like walking, cycling and public transport.

In the context of air pollution, particulate matter relates mainly to very small particles that are less than ten micrometres in size.  These very small particles are commonly known as PM10s and they arise from the combustion of solid fuels and from road traffic.  PM10s can also be caused by the chemical reaction of other air pollutants in the atmosphere and from natural sources such as airborne sea salt.

PM10s are of concern because, due to their small size, they can penetrate deep into the lungs and can thereby damage the respiratory system and the heart. 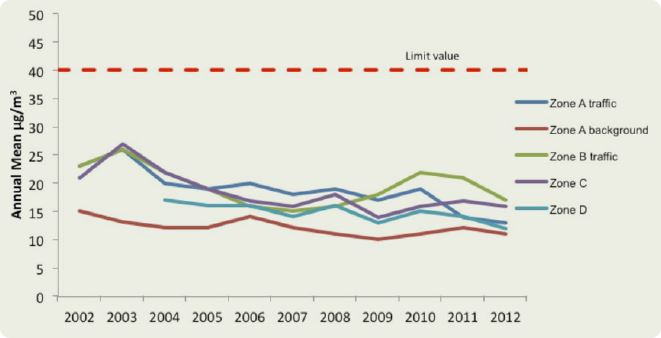 The PM10 limit in air is set at a mean of 40 micrograms per cubic metre annually. A decreasing trend is seen in urban zones (Zones A, B and C) since 2003,which is most likely due to the decreases in particulate emissions from traffic due to improved vehicle engine emissions (although Zone B has shown a rise and fall in recent years). This general decrease is not seen in Zone D, where domestic solid fuel emissions are more significant than traffic emissions.

Emissions from cars have reduced over recent years thanks to improved engine design and exhaust cleaning, but the number of vehicles on the road has cancelled this out to some extent.  High PM10s were recorded both in inland towns, due to traffic and solid fuel burning, and at seaside locations due to sea salt in the air.

Previous - Oxides of Nitrogen
Next - Lead