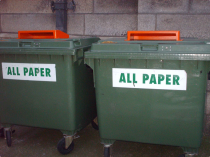 At your local bring bank you are likely to see bins like these, plus bins for cans, glass and other waste. It is important to separate your waste before heading off to a bring bank.

At your local bring bank you are likely to see bins like these, plus bins for cans, glass and other waste. It is important to separate your waste before heading off to a bring bank.

Since 1996, when the Waste Management Act came into force, there have been big changes in how waste, particularly municipal waste, is handled in this country. Before then, waste was brought directly from households and business to a nearby dump that was unlicensed and generally poorly operated with little controls on leachate and landfill gas.

With the introduction of a licensing system a large number of those dumps closed down and planning for waste handling and disposal was done on a regional basis. This led to the development of bring banks and civic amenity sites, where people could deposit recyclables, and to material recovery facilities where waste was sorted and separated mechanically and manually.  It also led to a smaller number of larger landfills with properly engineered cells to contain leachate and with pipework in place to recover landfill gas.

The table below illustrates the increase in facilities such bottle banks and civic amenity sites, and charts the decrease in municipal and industrial waste. 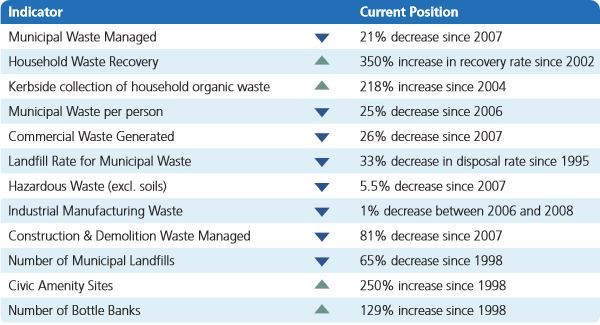 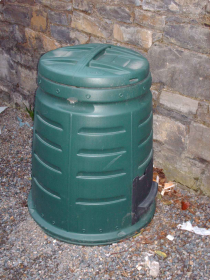 Compost bins, like the one in the image, are relatively cheap and provide an important source of environmental protection. It can also save you money on soil for your garden plants.

Compost bins, like the one in the image, are relatively cheap and provide an important source of environmental protection. It can also save you money on soil for your garden plants.

Organic material, such as kitchen and garden waste, can be broken down by bacteria, fungi, worms and beetles in a controlled environment in a process called composting. These organisms feed on the organic waste to leave a dark, nutrient-rich material that can be used as a soil conditioner and fertiliser. Many households now have home composting bins and recover much of their household organic waste in this way.

Industrial sized compostors also contribute significantly to the reduction of waste. A commercial composter is capable of processing over 20 tonnes of organic waste per year (50-60 kgs on average daily), and the biological activity of composting reduces the volume of waste by up to 90% (Longford CoCo, 2013).

Another method of dealing with organic wastes is through digestion in tanks in the absence of oxygen. This is known as anaerobic digestion and is very suitable for liquid organic wastes such as slurries and manures that are not suitable for composting. The carbon in the waste is converted by bacteria to methane which can be used as a fuel for transport, delivered to the gas grid or used to generate electricity.  It is a clean and efficient way to extract energy from waste and, along with composting, has enormous potential in Ireland.

Landfilling continues to be the dominant form of waste disposal in Ireland. However, as can be seen in the chart on the right, landfills will be nearing capacity in the next decade. As such, Ireland needs to use all possible legislative and economic instruments to encourage a move away from this form of waste disposal.

Once such method of waste management is incineration. It is anticipated that waste-to-energy incineration at merchant incinerators or large energy units attached to industrial facilities will play a key role in achieving Landfill Directive targets (EPA, 2012).