Earth’s resources are finite. With over 7 billion people on the planet now and a projection of 9 billion by 2050 we must all learn to live more sustainably and to minimise our resource use. Irish people use a lot of resources, and generate a lot of waste, when compared to other countries. We dump most of that waste into landfills where the high organic fraction creates problems of odour and poses a pollution risk to water. While we are making good progress with recycling of certain products, and the quantity of recovered organic waste is increasing yearly, we still export almost half our hazardous waste for processing in other countries. 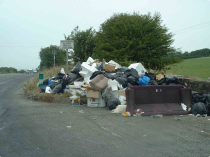 Flytipping is the dumping of waste on the side of the road for others to deal with.

Flytipping is the dumping of waste on the side of the road for others to deal with.

Some people dump waste of all sorts on the side of the road and leave it there for others to deal with. This is known as flytipping and is a particular problem in quiet rural areas close to cities and towns. Anyone who walks in the countryside or in the forests will have encountered this problem.

Flytipping is illegal. It is impossible for the regulatory authorities to police all locations at all times so it falls to each of us to be vigilant and to report any such activity that we see. Similarly, if we are disposing of any large household item, such as a mattress, we should ensure that the people we give it to have an up-to-date waste permit from their local authority.

Burning waste at home is dangerous to our health and to the health of everyone living around us. That’s because the smoke from the burning of plastic contains many dangerous chemicals that are carcinogenic (cancer-causing). The most dangerous chemicals produced in this way are known as dioxins and, once produced and scattered around by the smoke, they remain in the environment for many, many years. So, while burning waste may not give you cancer immediately, it may be the cause of a cancer in your household or in your neighbourhood in years to come.