The national landfill levy as well as EU legislation continue to be primary drivers of change in relation to such waste management practices in Ireland. Although Ireland is still very dependent on landfill for residual waste disposal (53%), the improved recycling rate (i.e. energy recovery excluded) (40%) is the same as the EU 27 average.

Waste can also be burned in incinerators with its energy recovered, although recycling and composting are seen as the most desirable method for certain types of our waste. Below is a comparison of how Ireland deals with its municipal waste relative to the EU27 average.

Disposing of waste in a landfill involves burying rubbish and this remains a common practice in most countries. Landfills were often established in abandoned or unused quarries or mining voids. They can create a number of adverse environmental impacts such as leachate, gas, wind-blown litter and the attraction of vermin. Methane gas is a common by-product of landfills. It is harmful because it can kill surface vegetation, is a potent greenhouse gas and it smells.

Part of the Government's policy on landfills is to move from a high number of poorly managed landfill facilities to a much smaller number, operated to the highest environmental standards. There were 87 local authority landfills in 1995, which decreased to 76 in 1998 and to 50 by the end of 2001. This downward trend has continued to 25 landfills as of 2011 (EPA, 2013).

The majority of landfills in Ireland are run by local authorities. The Department of the Environment , Community and Local Government plans to reduce the amount of landfill sites in the country to approximately 20 state-of-the-art sites. These landfills will be capable of energy recovery and will operate to the highest environmental standards.

With effect from 1 July 2013, the Minister for the Environment, Community and Local Government increased the landfill levy, using the power available to him under the Waste Management Acts. The Waste Management (Landfill Levy) (Amendment) Regulations 2013 (SI No. 194 of 2013) (pdf, 104kb) increased the landfill levy by 10 euro to 75 euro per tonne for each tonne of waste disposed of at authorised and unauthorised landfill facilities. It is anticipated that significantly higher levy rates will further incentivise the diversion of waste from landfill.

The waste keeps piling up.

More waste is dumped off at the landfill

Moving waste on a landfill

Waste is moved around the dump.

Huge trucks are used to move the waste around a landfill, adding to the carbon footprint of the place.

Diggers and trucks are used to make room for even more rubbish on site. 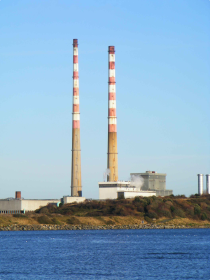 This is a disposal method that involves the burning of waste material. It converts unwanted materials into heat, gas, steam and ash.

Commercial incineration of municipal waste commenced in late 2011 at Indaver Ireland’s Carranstown, Co. Meath site, and is currently consented to treat up to 0.2 Mt per year (EPA, 2013). The EPA also granted waste licences for commercial incinerators to Indaver Ireland (Ringaskiddy, Co. Cork) and Dublin City Council (Poolbeg). Construction at the Poolbeg facility has halted however, and has not commenced at the Ringaskiddy facility to date (January 2014) after local objections. Although these kinds of installation appear a ready solution to the waste problem, they often attract opposition because of health and safety fears.

Use of waste as a fuel

Previous - Waste Management Concepts
Next - Lifecycle of a Product