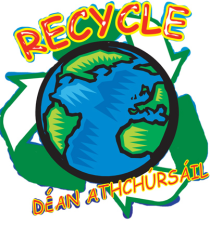 The message is clear; recycling is good for the environment. It saves energy, reduces raw material use and combats climate change - which is dealt with in another section of this website. In 1998 the problem in Ireland was our lack of recycling facilities. Since then, however, significant resources from the 2002 Environment Fund have been focused towards improved recycling infrastructure. €22 million was set aside for seventy-one local authority recycling projects. The results were that 48% of households could avail of separate collections of dry recyclables. The number of civic amenity sites in operation has increased steadily, from 69 in 2004 to 90 in 2007, and local authorities reported 113 civic amenity sites and 1,891 bring banks in operation in 2011, compared to 107 and 1,922 respectively in 2010 (EPA, 2013).

Compared to our European counterparts Ireland has progress to make, but significant improvements have been made in recent years. In 2011 some 40% of municipal waste was recycled, up from 2009's figure of 35%, which compares favourably with the EU average of 40%. 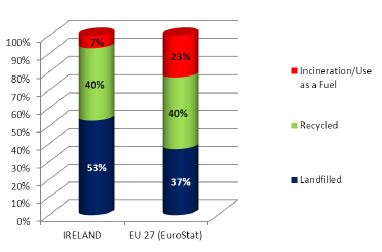 Energy recovery is another important part of recycling as waste can be incinerated and the energy can be recovered in a purpose built factory.

Biological reprocessing is when organic waste materials can be recycled using biological composting or anaerobic digestion. The resulting  product can be used as mulch or compost for agricultural and landscaping purposes. In addition, gas from the process (methane) can be captured and used for generating electricity. Dealing with waste in this controlled fashion speeds up the natural process of biodegradation. In Ireland the hope would be that recovering biodegradable waste would divert it from landfills. The EU Landfill Directive requires that by 2016 only 35% of biodegradable municipal waste generated will still be going to dumps.

Composting is becoming a welcome feature of Irish gardens.

An important method of waste control is the prevention of rubbish being created, also known as waste reduction. Means of avoidance include the reuse of second-hand products, repairing broken items instead of buying new ones and designing products to be refillable or reusable.

In April 2004 the EPA launched the National Waste Prevention Programme. It drove reduction policy like the Green Home program (more information on (www.greenhome.ie), Packaging Waste Prevention Programme and The Green Business Initiative. In 2007 the EPA also recommended separate food waste collection services for houses and businesses and the creation of infrastructure to treat large amounts of organic waste.

Previous - Lifecycle of a Product
Next - Disposing of Asbestos Waste