The WFD was created in December 2000 and implemented in 2003 with the aim of improving the quality of our water environment. Its purpose is also to integrate existing European directives into the new legislation. The directive requires each Member State to implement changes to the management of water bodies, taking account of all aspects of the Water Cycle. The principal objective of the directive is "to achieve good status in all waters by 2015 and [to] ensure that status does not deteriorate in any waters." 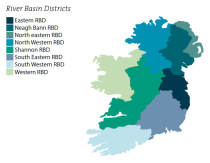 The Breakdown of River Basin Districts

The Breakdown of River Basin Districts

A River Basin Management Plan is made every six years. The objectives of the WFD are implemented for each region of the country and require that the water environment is managed on natural river basins (or catchments). The river basin is an area of land from which all water makes its way to the sea through rivers, lakes, tributaries and underground routes. In Ireland , there are over 400 river basins which are grouped into a total of eight River Basin Districts:

All districts must adhere to regulations that include both water quality and the economic use of the water in the river basin district. The plan must incorporate input from the industrial and agricultural sectors, the community and non-governmental organisations.

Several other EU Directives dealing with water quality are in force, such as the Nitrates Directive. The Nitrates Directive aims to reduce and prevent water pollution caused by nitrates from agricultural sources, with the primary emphasis on the management of livestock manures and other fertilisers. The main provisions of this directive are:

The latest nitrates report can be found here. 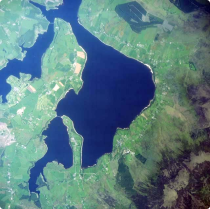 This lake and reservoir are within the Special Areas of Conservation for its wild bird population. The reservoir here is one of two major sources of Dublin's water supply.

This lake and reservoir are within the Special Areas of Conservation for its wild bird population. The reservoir here is one of two major sources of Dublin's water supply.

Under the WFD the bodies of water that need to be protected are:

All wildlife and habitats associated with the water environment must also be protected through extensive monitoring and investigation. The Habitats Directive provides the framework for legal protection of habitats and species of European importance. This protects these habitats and species through an EU-wide network of conservation. This is better known as the Natura 2000 network, consisting of SACs (Special Areas of Conservation), SPAs (Special Protection Areas) and sites that are being considered as one of the above.

River Basin Management Plans must also be subjected to a Strategic Environmental Assessment to ensure that all measures undertaken are acceptable on a broader environmental level.