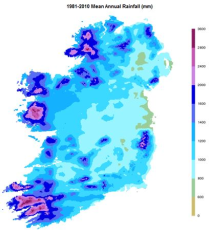 Ireland is a country well known for its lush green fields. This is largely thanks to our wet climate. Water is one of our most important resources. Our island is surrounded on every side by water and we have one of the highest water availability rates in Europe .

Our waterways are a big attraction for recreation and tourism and our aquatic environment plays host to a multitude of different species that enhance our ecosystem.However, despite all of this natural advantage, clean water is becoming scarce. In theory, we receive enough water from rainfall to meet the needs of the population, but there is an imbalance in the demand for and the distribution of water.

Our proximity to the Atlantic Ocean has a dominant influence on our weather patterns. The prevailing winds which come from the Atlantic hit the west coast first, often in conjunction with weather fronts. The west is therefore generally wetter  than the east, as can be seen in this map of Ireland 's rainfall distribution between 1980 and 2010. These differences in the regional rainfall across the country influence the relative availability of water in different areas.

The western part of the country is also less densely populated than the east and the combination of this factor, together with the east's relatively smaller supply of rainwater, leads to occasional incidences of water shortages in eastern regions. These shortages are, however, predicted to increase in severity in coming decades with the Greater Dublin Area facing the most significant challenges.

Aerial view of part of Malin Head, Donegal and the North Atlantic Ocean

In Ireland, our drinking water usually comes from lakes, rivers and artificial reservoirs, particularly those used for public water supplies. Private sector suppliers and group water schemes tend to rely more on groundwater and spring water. Groundwater and springs contribute to about 16% of the total drinking water supplied nationally, while this rises to 86% in some rural areas.

Whether our drinking water undergoes treatment or not, it must adhere to certain regulations. Drinking water regulations set limits for substances found within the water. There are 48 substances of concern, grouped into three categories as follows:

Different Uses of Water in Ireland 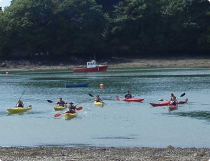 Of course, water is not just for drinking and household needs. It is used in many different ways; by industry, agriculture and for recreation, to name but a few.

Industrial water use includes using water for such purposes as fabricating, processing, washing, diluting, cooling, transporting a product; or for sanitation needs within the manufacturing facility. Some industries that use large amounts of water produce such commodities as food, paper, chemicals, refined petroleum, primary metals and computer chip manufacturing. Even within other less obvious industries, some aspects can be very water-intensive. For example, the car-wash service in the motor industry uses copious amounts of water every day.

Agricultural use of water accounts for nearly 70% of the water used throughout the world, and the majority of this water is used for irrigation. This enables land which does not receive enough annual rainfall to become productive. In addition, crops and livestock also need to be supplied with water to survive and flourish. While this accounts for a much smaller amount of water usage than irrigation, it is still a significant consideration.

Recreational: Water plays host to a number of recreational activities and many Irish people engage in these activities using the seas, rivers and lakes on a regular basis. Tourism in Ireland also promotes a large array of water activities including angling, swimming, river cruises, kayaking and many more.