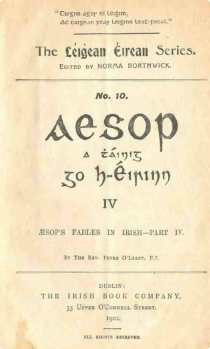 Born in 1839, Peadar†” Laoghaire went to college in Maynooth where he was ordained into the priesthood in 1867.† He came from a family which spoke both Irish and English fluently.† Peadar supported Davit and the Land League and was determined to improve the education system in Ireland .† In the years that followed, the Gaelic League was formed and ” Laoghaire began to see the need for reading material in the Irish language, especially for the younger generation.† Peadar was most famous for his book Sťadna, which was one of the first books written in Irish that was of interest to people.† He wrote this book, like all his other Irish books, in the simple Gaelic language that he was familiar with in west Cork .