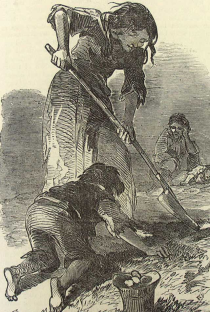 Digging for Potatoes during the Great Famine

From The Illustrated London News. Illustrations like this were used to show the hardship caused by the Great Famine.

Digging for Potatoes during the Great Famine

From The Illustrated London News. Illustrations like this were used to show the hardship caused by the Great Famine.

The Great Famine (1845-1849) was an enormous tragedy in Irish history. The majority of Irish people were peasants who depended on the potato for their survival. When disease affected the potato crop in 1845, disaster struck. However, the Famine was not just due to the failure of the potato crop. It was also due to the inequalities in the way agricultural life was organised in Ireland. During the Famine, food continued to be exported for sale abroad, both by the Anglo-Irish landowners and wealthy Catholic farmers, even though many Irish peasants were facing certain starvation and death. Relief measures by the British government were inadequate, and the workhouses were overcrowded and filled with disease. The Famine is thought to have killed over one million Irish people. A further one million emigrated during the Famine years, in order to escape starvation and seek work and refuge in countries like America, Canada, England and Australia. Emigrants often travelled to North America in ships that were overcrowded and badly equipped for the long transatlantic journey. There was little sanitation, inadequate food and insufficient water in many of the ships, which caused the spread of disease. Many emigrants died before they arrived at their destination. For this reason, the emigrant ships became known as 'coffin ships'.