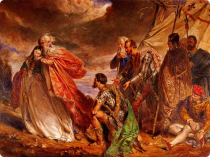 Cork-born Daniel Maclise was one of the most celebrated Irish painters of the nineteenth century. His luminous colours, pictorial brilliance and sense of history astounded the British art world and the British public. His huge popularity can be gauged by the prices paid immediately for his work: Ł1,785 for his Strongbow and Ł1,370 for his Robin Hood. He created two magnificent historical mural paintings for the Houses of Parliament in London: The Meeting of Wellington and Blücher (1861) and The Death of Nelson (1865). Maclise's handsome stature, kindly nature, and personal charm won him many friends among the writers and society figures of Victorian London. Albert, the Prince Consort, spent entire afternoons in Maclise's studio, and writers like Charles Dickens, Thomas Moore, and Francis Sylvester Mahony were enthusiastic supporters of his work.

Maclise was enrolled as a student of painting in the Royal Academy (RA) in 1828 and, a year later, won the silver medal for antique drawing. He finally won the gold medal for History Painting in 1831 for his The Choice of Hercules. History painting and portraiture would become the dominant choices of his brilliant career. Maclise's relationship with writers was also an important part of his life. He illustrated some works of Dickens, including The Chimes (1845) and The Cricket on the Hearth (1846), as well as the influential Reliques of Father Prout (1836) by Rev. Francis Sylvester Mahony.

Having left Cork in 1827, Maclise centred his entire life in England where he felt completely at ease. He rarely returned to his native land, but lived eventually in a beautiful house in Cheyne Walk, with his sister Isabella, or at his seaside apartment in Brighton.

Next - Early Life and Youth in Cork