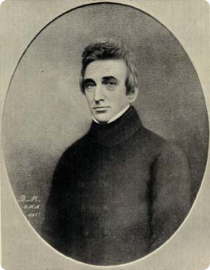 John Hogan was born at Tallow, Co. Waterford, in 1800 but spent all of his formative years in Cork. He was one of the most important Irish sculptors of the nineteenth century. He is always associated with a generation of neo-Classical artists who were trained at the School of Art in Cork, founded in 1819. Although initially apprenticed to a Cork solicitor in whose company he spent two 'wasted' years of his youth, he was destined for a life in art by family background and temperament. He was subsequently apprenticed to the architect Thomas Deane, and soon came under the influence of the great Classical casts when they arrived in Cork from the studios of the Italian sculptor Canova. He journeyed to Rome in 1823 and spent over twenty-four years in Italy where he enjoyed the friendship and encouragement of such greats as Aloysius Gentili and the Danish sculptor Thorwaldsen. After studies at the English Academy and the Capitoline Museum, he set to work on a distinguished and busy career as a professional artist.

Hogan's first Roman work was Shepherd Boy, a naturalist treatment of a peasant boy in recumbent pose on the steps of the Piazza di Spagna. This work was followed by one of Hogan's best loved pieces The Drunken Faun, which was acknowledged by Thorwaldsen as a 'miracle of art'. He then created the startled figure of Eve, and, afterwards, versions of his magnificent Dead Christ. He exhibited The Faun and The Dead Christ at the Royal Dublin Society in 1829 and both works were purchased. In his career, the Pietŕ would become his favourite and most distinctive subjects.

He married an Italian, Cornelia Bevignani, in 1837 and they had eleven children. One son, John Valentine, followed him into the artistic profession. Hogan visited Ireland many times between 1829 and 1848, taking and supervising commissions, mainly from Catholic church committees. His magnificent memorial sculpture of Bishop J.W. Doyle of Kildare and Leighlin at Carlow Cathedral created a sensation and led to his proud membership of the Virtuosi del Pantheon, the oldest and most exclusive of Roman Academies. The Catholic sources of work, that had begun with Bishop Murphy of Cork in the 1820s, now helped Hogan to create work for Loreto Abbey in Dublin, the Bishop of Newfoundland, the Repeal Association, and the Capuchins in Ireland.

Following the political disturbances in Europe and the violence of Rome in 1848, Hogan decided to return to Ireland. Yet, Hogan was neither a member of the Royal Academy nor the Royal Hibernian Academy and he found himself excluded from many important commissions after his return to Ireland.

He failed to get the Thomas Moore commission or the Dr Murray Procathedral commission and such failures began to play on his health. The years after the Great Famine were probably the worst years of Irish social life, consequently rewarding commissions in art were very rare. Disappointed and diminished, John Hogan died, too young, in March 1858.

Next - Hogan's Early Life and Education