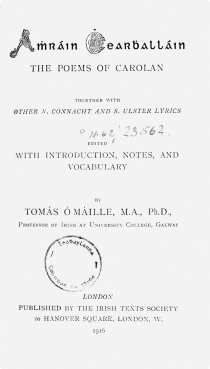 TomŠs ” MŠille, Professor of Irish in Galway, edited the poems of Carolan and other north Connacht and south Ulster lyrics. The collection was published in London in 1916 by the Irish Texts Society.

TomŠs ” MŠille, Professor of Irish in Galway, edited the poems of Carolan and other north Connacht and south Ulster lyrics. The collection was published in London in 1916 by the Irish Texts Society.

This item is out of copyright
Enlarge image

Carolan married Mary Maguire from county Fermanagh though the date of their marriage is not known. It was probably around the time of his marriage that Carolan bought a house and farm in Mohill in county Leitrim although he continued his musical travels too. Despite his earlier strong feelings for Bridget Cruise Carolan was deeply attached to his wife. On her death in 1733 he recalled how happy his life had been and how he had enjoyed the company of other music lovers. Now he was left "solitary and sorrowful at the end of my days, with my partner no longer alive."

The couple had seven children, six daughters and one son. His son's name is not known and it is thought he moved to London and taught the harp there although he does not seem to have been a talented musician. Of his daughters only a small amount of Siobhan's life is known. She married an English army officer called Captain Sudley. Carolan celebrated the marriage with a piece called "Captain Sudley" sometimes also called "Carolan's dowry".

Much has been made in Carolan literature of his drinking habits. Carolan's way of life, the kind of festivities he played at and the hospitality he enjoyed all contributed to an atmosphere where alcohol played a part. His favourite drink was a mixture of whiskey and ale but in his drinking he was probably no different to the bulk of his eighteenth century contemporaries. Poor hospitality aroused keen satire in Carolan. On being given a small drink in a Mayo house he responded "Devil take the glass that was meant for a dwarf and the same for the hand that didn't fill it by half!"

What is certain is that Carolan could not have composed the number and variety of tunes he did if he was frequently drunk. Similarly he could not have travelled so much and supported his wife and family if he was not in a fit state to do so.

Carolan's strength of character is evident is his loyalty to Catholicism. In the Penal Law era it was difficult to practice the Catholic faith but it is said that Carolan frequently played the harp at Masses and composed some religious music. The fact that more than sixty priests attended his funeral is confirmation of his loyalty to the Catholic Church.

Carolan's identity as a poet had an impact on the popular imagination. His poetic gift was widely regarded as originating in the mysterious otherworld, the realm of the fairies. Tradition in Nobber around 1820, about 80 years after his death, related how the young Carolan used to rest and doze on a rath or moat near his father's house in Spiddal. One day he stared up suddenly out of his sleep. On reaching home he called for his harp and began to compose the music and words of his song to Bridget Cruise. Nobber people at the time firmly believed that Carolan got his gift from the queen of the good people, who held her court in the interior of this rath. This belief that poetry is a gift from the otherworld goes back to the pagan Celts. Among the Celts the poet was a druid or seer with a vision beyond the normal. In their mythology a goddess bestowed the mystical gift of poetry.