This was a gift, along with a bearing sword, of King Henry VIII of England to the Mayor of Waterford in 1536.

Henry's letter of 1536 states: ...'And now at this tyme as a remembrance and evident token of our favours we have sent you by this brynger a Capp of mainteynance to be borne at tymes thought by you necessarie before you the Maior being our officer of that our said Citie and your successors officers of the same. Given under our signet at our Manor of Greenewich the last day of Aprill in the xxviiith year of our reigne. To our right trustie and welbeloved the Maior and Cominalty of our Citie of Waterford in our land of Ireland.'

A cap of maintenance was worn under the crown by the monarch from early Norman times and he to whom the right was granted need doff his cap to nobody. It was therefore a significant mark of royal approval. A cap and a sword were traditional items in a mayor's regalia although by the mid-16th century they were more of symbolic importance. This cap, of red velvet from Lucca in Italy and embroidered with Tudor roses and marguerites (for Henry's grandmother), was probably made at the royal court. A strip of whalebone in the crown to keep it erect has recently been confirmed by carbon dating to be original.

This is the oldest such cap in Europe and it has recently been discovered that it is the only piece of Henry's clothing to survive. 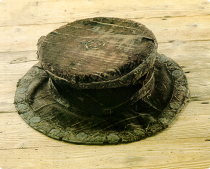