Whelan: The Battle of Jadotville 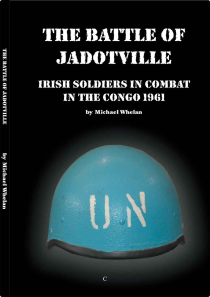 The Battle of Jadotville by Michael Whelan tells the largely forgotten story of an epic six day siege of Irish soldiers serving with the United Nations Forces in the Congo (ONUC) by Katangan forces in the Republic of the Congo, Central Africa in September 1961.

Irish neutrality during the Second World War meant that the Republic of Ireland was excluded from membership of the United Nations until 1955 due to a Soviet Union veto. During the post-war period weakened European colonial empires in Africa gradually fell apart under the pressure of local nationalist and socialist political forces and the rival Cold War superpowers, the Soviet Union and United States. The Congo, in central Africa, had been a Belgian colony since the late 19th century until violence and political unrest forced the Belgians to relinquish control in 1960.

The Republic of the Congo was created in June, 1960 followed by parliamentary elections. However hopes for a peaceful transition were soon dashed by an attempted military coup and rebellions in both the provinces of Katanga and Kasai. Prime Minister Lumumba sought help from the Soviet Union while President Kasavuba was an ally of the United States. Mining companies hired white Western mercenaries to protect their substantial economic interests in the region. Many of these men were experienced veterans of World War II and other conflicts

The United Nations Forces in the Congo (ONUC) consisting of approximately 20,000 troops including Irish troops were sent to the Congo in July 1960 to keep the peace. In November 1960, during an ambush on an eleven man Irish patrol by Baluba tribesmen loyal to Katanga, nine Irish soldiers were killed. The incident shocked the Irish nation which had not experienced such casualties since the Irish Civil War 1922-1923.

On 3rd September 1961 approximately 158 Irish infantrymen of A Company, 35th Battalion commanded by Commandant Pat Quinlan arrived in Jadotville tasked with protecting Belgian colonists and locals from Katangan forces. The Jadotville area was an important mining region and it is said that uranium ore from the town was used in the atomic bombs dropped on the Japanese cities of Hiroshima and Nagasaki in 1945. At the same time UN forces were involved in a military offensive against the State of Katangan to end its secession from the Republic of Congo.

A Company  were armed with submachine guns, automatic rifles, machine guns and 60mm light mortars but lacked heavier support weapons such as heavy mortars and field artillery guns. Commandant Quinlan wisely ordered his men to establish a perimeter and dig defensive positions which would prove to be crucial to the outcome of the battle that was to come. Katangan forces numbering approximately 5,000, including Baluba tribesmen, gerdarme, Belgian colonists and white mercenaries, attacked A Company while they attended Catholic mass. Alerted by a warning shot from an Irish sentry, the Irish troops ran to their positions and repulsed the first Katangan attack.

For the next six days the Irish defenders held out against repeated assaults by Katangan forces. The assaults began with bombardments of 81mm heavy mortars and 75mm artillery shells followed by waves of armed Katangan infantry attempting to storm the Irish positions. Meanwhile a circling Fouga Magister jet aircraft strafed the Irish infantry from the air with cannon fire, destroying their motor transport.

A Company repulsed the repeated attacks and inflicted hundreds of casualties on the enemy. The Irish also eventually located and knocked out most of the enemy heavy weapons with accurate counter-battery fire with their own light 60mm mortars. White mercenaries leading the Katangans resorted to shooting deserters as their morale began to crack.

Notified about their precarious situation, hundreds of fellow Irish and other UN troops tried to reach Jadotville by road convoy to relieve A Company but were forced to retreat by strong Katangan resistance. A supply helicopter braved Katangan fire and succeeded in landing drinking water at Jadotville but it was discovered to be contaminated by diesel fuel.

Running low on ammunition, food and water and unable to resupply or evacuate his half dozen wounded men, Quinlinn was forced to surrender to the Katangans without any clear directions or assistance from higher command. The Katangans are believed to have suffered approximately 300 dead including thirty white mercenaries and perhaps 1,000 wounded with their effective strength reduced to about 2,000 men by desertions. The men of A Company were held captive for about a month until they were exchanged for Kantagan prisoners held by the forces of Congo President Kasavubu.

Although the men of A Company had fought bravely and had only surrendered when they had no remaining options available,  it was considered an embarrasment by Irish authorities. Consequently A Company received no recognition for their heroism. Commandant Quinlinn had recommended several men for the Military Medal for Gallantry (MMG), the Irish Defences Forces' highest award but none were ever awarded. Quinlinn retired with the rank of Colonel but never served overseas again and he died in the 1980s.

Decades later books such as The Battle of Jadotville publicised what was a largely forgotten incident. Veterans of A Company campaigned for Quinlinn's outstanding leadership and heroism to be recognised and his reputation restored. In 2004, Defense Minister Willie O'Dea ordered an inquiry which ultimately cleared Quinlinn and his men of any misconduct. The Battle of Jadotville has since been commemorated with a monument at Custume Barracks, Athlone, Co. Westmeath and a portrait of Commandant Quinlinn hangs in the Irish Defence Forces' UN School.

Previous - Tracy: If Those Trees Could Speak
Next - Williams: St. Mochua and the Round Tower