Ball: Howth And Its Owners 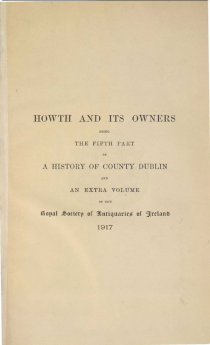 Howth Castle And Its Owners by the eminent Anglo-Irish historian, Francis Erlington Ball (1863-1928) was first published in 1917. It is the fifth part of an historical series on the history of Dublin commissioned by the Royal Society of Antiquarians of Ireland. The book traces the fortunes of the owners of Howth Castle and their influence over the Howth area.

Howth Castle has been the stronghold of the St. Lawrence family for hundreds of years. Initially a timber fort was built on Tower Hill before a permament stone walled Norman castle was constructed. The residence gradually evolved over the centuries into a palatial mansion. The architect Sir Edwin Lutyens (1869-1944) restyled the current castle built in 1464. Howth Castle is possibly the oldest family home in Ireland .

The St. Lawrence family steered their way unscathed through the Middle Ages, Tudor, Elizabethan, Jacobean, Commonwealth and Restoration periods of British and Irish history. The book traces how the St. Lawrences retained their titles and lands while their contemporaries declined and their castles and estates were destroyed.

The St. Lawrence family arrived in Ireland during the Norman invasion 1169-1170 led by Richard De Clare, 2nd Earl of Pembroke, better known as 'Strongbow.' Sir Armoricus Tristram of Normandy defeated the Vikings in battle at Howth on St. Lawrence Day, 10th August 1177 and adopted the name as a result. The family subsequently became hereditary rulers of Howth.

In the centuries that followed the English monarchs were preoccupied with fighting the Crusades, war with France and various civil wars. Meanwhile Norman families who settled in Ireland gradually merged with the Gaelic Irish and adopted their customs and language. In time Norman English influence was largely confined to the area around Dublin known as the Pale defended by strongholds such as Howth Castle . For a time the powerful Earls of Kildare, the Fitzgerald family, ruled Ireland through a system of alliance with the Gaelic Irish. They put down rebellions but often defied England themselves.

The victory of the Tudors over the rival Plantagenets during the War of the Roses, led to the strengthening of the English monarchy and ultimately to the reconquest of Ireland . In the reign of the Tudor King Henry VIII, England became a Protestant kingdom. The 'Old English' Norman families and Gaelic Irish refused to renounce their Roman Catholicism. The St. Lawrence family however remained loyal to the English throne. British Protestant settlers were planted in Ireland leading to repeated Irish rebelllions. The final defeat of the Gaelic Irish and the Old English family dynasties came in the 16th and 17th centuries. The Protestant Ascendancy including the St. Lawrences, controlled Ireland until the late 19th century when Irish nationalists challenged their power.

In the 19th century, Thomas St Lawrence , 3rd Earl of Howth served as Lord Lieutenant of Ireland (1851-1874). William St Lawrence , 4th Earl of Howth served as an Member of Parliament for Galway Borough and became elevated to the peerage as Baron of Howth in 1881. When he died in 1909, the barony and earldom of Howth lapsed and were assumed by royal license by his nephew Julian Gaisford.

Subsequent to the publication of Elrington Ball's book, Ireland saw more political upheaval. The 1916 Rising and War of Independence led to the creation of the Irish Free State . During the period many of the remaining castles and houses of the Anglo-Irish gentry were destroyed by republicans but Howth Castle remained untouched.

In 1576, it is said that after the pirate Grace O'Malley was refused entry to Howth Castle , she captured the Earl of Howth's grandson. He was released on condition that in future, un expected visitors would be received at Howth Castle . The St. Lawrence family proudly continued this tradition for centuries.

Previous - Ball: A History of the County Dublin
Next - Cosgrave: North Dublin City and Environs