O'Connell: Letters to "The Kerryman" 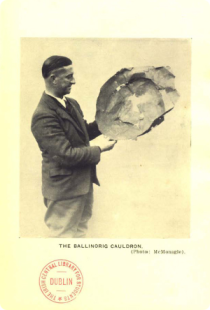 Between September of 1936 and December of 1938, Commander Donal B. O'Connell published a series of twenty-nine letters and reports to The Kerryman discussing the archaeology and antiquities of County Kerry . These letters were later published in book form in 1939 and are an important record of the Kerry Archaeological Survey.

From the mid 19th to the early 20th century, a number of attempts were made to form historical, archaeological and antiquarian associations and societies and publish historical journals in County Kerry . The Kerry Magazine, a brilliant and scholarly publication, first appeared in 1854 but discontinued in 1856, to the disappointment of Archdeacon Rowan, due to a lack of support.

It was not until 1907 that the Kerry Archaeological Association was formed with the Earl of Kenmare as its president aiming to create a deep interest in the history of the county and The Kerry Archaeological Magazine was published from October 1908 until July 1920. The association and magazine ceased their activities due to the Irish War of Independence and Irish Civil War.

The County Kerry Society was created in 1922 in London to enable members of prominent County Kerry families 'to keep in touch with one another, by means of social intercourse, and to maintain the old ties, associations and memories.' The aim of the society was to continue to study the history, antiquities and geneaologies of the region. Its Hon. Secretary H.L.L. Denny published a handbook of Kerry family and biography in 1923. However the society ceased to exist during World War II.

It was in 1936 that Donal B. O'Connell, who had served for thirty years in the Royal Navy before retiring a year before announced he was undertaking an archaeological survey of County Kerry . He aimed to catalogue ancient stones, monuments and sites and preserve them from destruction which was ongoing due to the ignorance of locals of the significance of 'old stones.'

He appealed for volunteers, for the co-operation of farmers and landowners to protect antiquities on their land and received the assistance of Kerry natives with local knowledge. He visited much of County Kerry , creating a card index of the 2,300 lowlands, describing every building and monument of interest townland by townland, researched existing references in books, documents and journals and compiled photographs, drawings and maps. He also collected objects uncovered during turf-cutting.

As a result of his efforts Commander O' Connell and those who assisted him ensured the survival of County Kerry antiquities, monuments and history which otherwise would have been destroyed.

Previous - King: County Kerry Past and Present
Next - Kildare