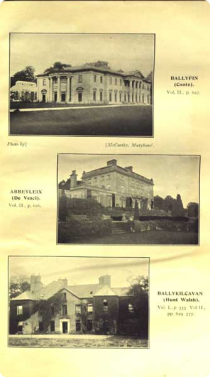 The second volume of A History of the Queen's County published in 1914 describes the history of Laois or Queen's County, as it was known during British rule, from 1556, when the region was shired by Queen Mary I, until 1900. The work was based on the papers of Very Rev. John Canon O'Hanlon (1821-1905).

After a series of rebellions by the O'Mores and O'Dempseys and an alliance of other Gaelic clans since the 12th century, their lands in Laois were finally confiscated in the mid 16th century. From 1556 Laois was subject in English plantation. The town of Maryborough (present day Portlaoise) was established as the county town but a period of prolonged guerilla war followed scaring off new settlers leaving only a small English community and series of garrisons to protect them.

In the 17th century, the Gaelic Irish and Old English Catholics suffered defeat at the hands of Oliver Cromwell and later William III of Orange. Penal laws persecuted Catholics religiously, politically and economically. The result was a rich and powerful Anglo-Irish Protestant gentry and a poor often illiterate poverty striken underclass of Irish tenants and peasants.

These injustices were to be the cause of the Great Irish Potato Famine of the 1840s which ravaged County Laois. Catholic Emancipation was secured in 1829 and the Irish nationalist campaign for land reform secured the rights of Irish tenants in the late 19th century. Hundreds of years of British misrule and injustices inspired 20th century Irish nationalists to demand home rule and later fight for Irish political independence in the years following Rev. O'Hanlon's death in 1905.

Rev O'Hanlon initially studied for the priesthood in Carlow College, Co. Carlow, a seminary and lay college which also educated Dr. Paul Cullen, Ireland's first Cardinal and the Young Irelander James Fintan Lawlor. His family emigrated to Missouri in the United States where completed his studies in a diocesan college in St. Louis. He ministered there until ill health brought him back to his native Stradbally in 1853. After his recovery he served the Archdiocese of Dublin for fifty years and devoted himself to historical and religious writings and poetry. He died in 1905 and his obituary described him as a 'simple, genial, saintly priest, with a warm heart that never forgot a kindness.'

Previous - O'Byrne: The History of the Queen's County
Next - Leitrim