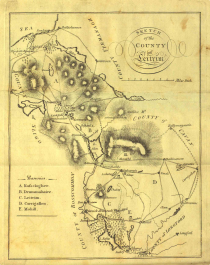 Map of Leitrim, taken from Statistical Survey of the County Leitrim, 1802

Map of Leitrim, taken from Statistical Survey of the County Leitrim, 1802

James McParlan’s Statistical Survey of the County Leitrim was published in 1802 on behalf of the Dublin Society. It is one of a series of statistic surveys of the counties of Ireland just after the turn of the 19th century which examined its agriculture, economy and society. County Leitrim is examined in detail creating a snapshot of its farming development and practices, crops, animals, living conditions, wages, money, religion, society and much more.

McParlan describes the natural beauty and rugged mountains in the north west of the county divided by Lough Allen from its flat south east portion. Leitrim features valleys, lakes, rivers and farmland and the shortest county coastline in Ireland. At the time of McParlan’s survey an unsuccessful attempt had been made to link the River Shannon and River Erne beginning in 1792. A completed waterway did not open to boat traffic until 1858. It was almost immediately obsolete due to the development of railways in the latter half of the 19th century.

Leitrim was once part of the ancient Kingdom of Briefne which was dominated by the Gaelic Irish O’Rourke clan who had their stronghold in Dromahair. The Normans conquered the territory in the 13th century. County Leitrim was created in 1565 during the Tudor conquest of Ireland by the Lord Deputy John Perrot and its borders were fixed in 1583. From the 17th century it became the possession of the Anglo-Irish Protestant Villier and Hamilton landowning dynasties.

At the turn of the 18th century the Catholic majority in Leitrim were tenants and peasants who lived in wretched poverty and survived on a basic diet of potatoes. They paid rents to Protestant landlords and tithes to the established Anglican Church. The worst excesses of the Penal Laws were in the process of being repealed and Catholic Emancipation would not be secured until 1829. McParlan also describes Leitrim’s cottage linen industry which was to be badly hit in the 1830s by economic recession caused by industrial mechanization. Mining of iron ore in the County Leitrim began in the 15th century until the 18th century while coal mining and sandstone quarrying became important in the 19th century.

A combination of factors would lead to the Great Potato Famine of the 1840s during which starvation, disease and emigration caused the County Leitrim population to plummet from over 150,000 in 1841 to just over 110,000 in 1851. Population decline would remain a problem in Leitrim and the wider Connaught region into the 20th century.

Previous - Hennessy: The Book of Fenagh
Next - Monahan: Records relating to the Dioceses of Ardagh and Clonmacnoise