Westropp: The Antiquities of Limerick and its Neighbourhood 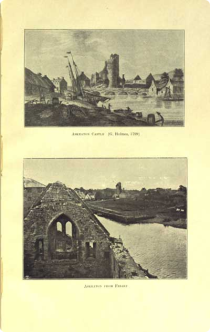 Westropp, T.J. The antiquities of Limerick and its neighbourhood. Dublin: Hodges, Figgis & Co., 1916.

Westropp, T.J. The antiquities of Limerick and its neighbourhood. Dublin: Hodges, Figgis & Co., 1916.

The Antiquities of Limerick and its Neighbourhood by Thomas Johnson Westropp (1860-1922) was written in 1916 on behalf of the Royal Society of Antiquarians of Ireland. At the time the raths, stone age monuments and medieval ruins which sprinkled the Clare and Limerick countryside were in danger of destruction as the Irish language faded and ancient superstitions vanished.

Westropp's work was an attempt to document County Limerick 's antiquities before they were destroyed and hopefully to encourage the preservation of those that remained. Westropp who had a deep knowledge of Irish history and folklore abandoned professional work to pursue his passion for archaeology. He also gathered and published collections of folk tales which are of major importance to the oral history of the region.

Westropp describes how ancient, medieval and modern Limerick developed over the centuries. King John's Castle was the Norman stronghold in the city while in the 17th century a complex series of defenses were constructed that protected the Limerick during a series of sieges culminating in the Treat of Limerick in 1691.

Nearby Killaloe was an important monastic settlement and features early Christian ruins from the time of St. Molua or Lua. At nearby Castleconnell, the castle of a family named Gunning was situated on a rocky outcrop on a bend in the river Shannon . It is said that Edward Bruce stayed there in 1317 during his military campaign in Ireland . It was destroyed during the Williamite Wars of the 17th century. Nearby Mountshannon House was the home of the Fitzgibbon dynasty until the magnificent 18th century mansion was destroyed by fire in 1920 during the Irish War of Independence a few years after Westropp wrote his book.

At Askeaton are the ruins of Desmond Castle dating from 1199, the stronghold of the Earls of Desmond, the Norman Fitzgerald dynasty, who ruled much of Munster . They refused to renounce their Catholicism and were defeated by English Protestant forces in the 16th century.

Westropp also describes Magh Adhair, the site of the inauguration of the Gaelic Kings of Thomond. There are also a wide range of medieval monastic ruins across the region which were once home to Augustinians, Franciscans, Cistercians, Benedictines and other religious orders before the monasteries were closed during the reign of Henry VIII.

The prehistoric monuments of Limerick mentioned by Westropp include wedge tombs, standing stones, mounds, raths, ringforts, stone circles which litter every corner of County Limerick . For centuries they were left undisturbed due to the superstitions of the Gaelic Irish who believed they were the dwelling places of the fairy folk. In modern times these beliefs faded and the monuments became vulnerable to destruction by Irish farmers who did not appreciate their historical significance.

Previous - Ferrar: The History of Limerick
Next - Limerick County