D'Alton: The History of Drogheda 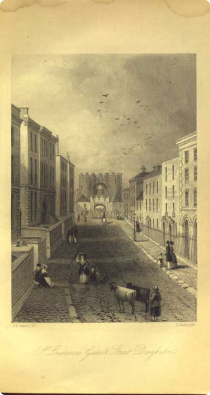 Prehistoric monuments and early Christian ruins show Drogheda 's was settled for thousands of years. Drogheda or Droichead Átha or 'bridge of the ford' refers to the River Boyne flowing through the town. In the 12th century after the Norman invasion, Drogheda was divided in Drogheda-in-Meath and Drogheda-in-Oriel . Oriel or 'Uriel' refers to what later became County Louth .

In the 12th century Hugh De Lacy built a hilltop stronghold known as Millmount Fort. Drogheda , surrounded by walls, became a part of the English Pale. The Irish Parliament was established in 1297 and Drogheda occasionally played host. In 1412 the two towns were united and Drogheda was designated a 'County Corporate,' styled as 'the County of the Town of Drogheda.' It remained a separate borough until the creation of Lough County Council in the 19th century.

The English Reformation transformed the enmity between the Gaelic Irish and English settlers into a religious one. After Gaelic defeat at the Battle of Kinsale, the plantation of Ulster with Protestant settlers began. In 1641 this led to a Catholic rebellion during which the town of Drogheda was besieged. In 1649, Oliver Cromwell besieged a combined Royalist and Catholic garrison. They refused to surrender and were massacred. Cromwell gained notoriety however by the standards of the day fortified towns which refused to surrender were given no quarter.

In the late 17th century Ireland became the battleground between the Jacobite and Williamite forces. Both sides met at Oldbridge on the River Boyne upriver from Drogheda . It was a decisive Williamite victory that led to a Jacobite surrender 1691. An Anglo-Irish Protestant elite dominating Ireland until the late 19th century and the persecuted Irish Catholics until Catholic Emancipation in 1829.

In the early 19th century major new industries arrived in Drogheda such as the Drogheda Steam Packet Company which began regular shipping services to Liverpool . Textiles and brewing were also important. By 1844 Drogheda had a rail link with Dublin. Apart from the more industrialised Protestant dominated north east, the rest of Ireland lagged behind the industrial cities of Britain .

After the publication of D'Altons book, Ireland was ravaged by the Great Irish Potato Famine from 1845 to 1852. Many of the rural Catholic Gaelic Irish poor in County Louth died from hunger and disease or emigrated. Relief committees established to feed the poor were overwhelmed. In 1845, the Ottoman Sultan Abdülmecid decided to contribute £10,000 to relieve the plight of Irish farmers. Queen Victoria had sent only £2,000 and so demanded the Sultan send only £1,000. The Sultan sent three ships full of food to the port of Drogheda .

D'Alton was born in Bessville, County Westmeath in 1792, studied at the Middle Temple in 1811 before being called to the Irish Bar in 1813. He studied at Trinity College and went on to write a series of Irish history books and translations of Gaelic Irish poetry. He died in 1867.

Previous - Beaufort: Materials for the Dublin Society Agricultural Survey of County Louth
Next - D'Alton: The History of Dundalk