Knox: The History of the County of Mayo 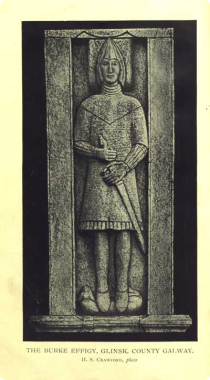 County Mayo has been inhabited for thousands of years with Neolithic, Megalithic, Bronze Age and Iron Age monuments and remains in evidence including court, portal, passage and wedge tombs, standing stones, ring-forts, stone circles and much more.

Little is known of who these people were but legend has it that Ireland was settled by descendents of Noah following the Biblical deluge. The supernatural Tuatha De Danaan were defeated by the Milesians, ancestors of the Gaels who came from Spain and their descendants became the various tribal clans who ruled the region until the Norman conquest of the 12th century. Among the chief Gaelic clans were O'Malley, O'Dowd, O'Lachtnan, Mac Fhirbhisigh, O'Cleary and many more.

The arrival of St. Patrick brought the pagan druidic religion to an end and Christian communities sprang up in places such Aughagower, Ballintubber, Errew, Cong, Killala and remote islands.

The Normans commanded by Richard De Clare better known as Strongbow came to Ireland following the invitation of the deposed King of Leinster, Dermot McMurrough. Strongbow married his daughter Aoife and claimed his royal title following his death however Henry II, King of England made himself Lord of Ireland and brought the Norman lords and Gaelic chiefs under his control.

Mayo remained remote from the Lordship of Ireland until Connaught was invaded by the forces of Richard De Burgh in the 1230s. Thus Anglo-Norman families such as Burke, Gibbons, Staunton , Prendergast, Morris, Joyce, Walsh, Barrett, Lynott, Costello, Padden and Price were introduced and for a time Norman rule was secure. In the 14th century, famine, pestilence and war caused the Lordship of Ireland to collapse and many of the Norman familes merged with the Gaelic tribes adopting their language, customs and dress.

Two factions of the De Burghs or Burkes in Connaght, the Clanwilliams and Clanricardes went to war with each other. Other Old English families also fought the Gaelic Irish or formed alliances with them against combinations of rival Old English and Gaelic Irish clans. During the medieval period European monastic orders such as the Augustinians, Carmelites, Dominicans and Franciscans established themselves at places such as Cong, Strade, Ballintubber, Errew, Burrishoole Abbey and Mayo Abbey.

From the 16th to the early 18th centuries a series of pivotal events such as the English Reformation, the reign of the Tudors and Stuart monarchs, the Cromwellian invasion, the Battle of the Boyne and the Penal Laws brought an end to both ancient Gaelic Irish civilisation and the power of the Old English dynasties. An Anglo-Irish Protestant landowning elite ruled the country with the majority of Irish Catholics reduced to the status of tenants and landless peasants surviving in wretched poverty. The best agricultural land in Ireland was in the south and east while County Mayo in particular was underdeveloped and economically backward.

During the 1798 United Irishmen rebellion led by Anglo-Irish Protestants inspired by the American and French Revolutions, the Gaelic Irish Catholics rebelled against British rule. A force of French troops led by General Humbert landed at Killala, defeated an English force at Castlebar and the short lived ' Republic of Connaught ' was declared. The French force was defeated in half an hour by a superior English force at Ballinamuck, County Longford . While the defeated French were sent home, the Catholic Irish prisoners were executed.

In the 19th century a series of crop failures and famines culminated in the Great Irish Potato Famine of the 1840s. County Mayo suffered greatly with whole villages and communities vanishing due to starvation, disease and mass emigration to America . Memories of the catastrophe fueled the activities of the Fenians, the Land League and Irish Parliamentary Party who pushed for land reform and Irish Home Rule in the latter half of the 19th century. A famous incident was the ostracisation of the landlord Captain Boycott by his County Mayo tenants. At the turn of the 20th century most of the Anglo-Irish Protestant estates had been broken up and most Irish farmers owned their land.

When Knox wrote his book in 1908, Ireland was on the cusp of revolutionary changes that brought about transformation of the democratic drive for Home Rule into a violent uprising against British rule between 1916 and 1922. A Civil War followed from 1922 to 1923 between rival republican forces. In the new Irish Free State and Irish Republic , County Mayo remained economically deprived compared to the rest of the country and experienced decades of continued mass emigration.

Previous - D'Alton: History of the Archdiocese of Tuam
Next - McParlan: Statistical Survey of the County of Mayo