McParlan: Statistical Survey of the County of Mayo 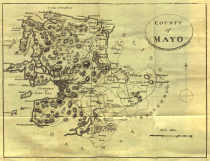 Map of County Mayo, taken from McParlan's Statistical Survey of the County of Mayo, 1802.

Map of County Mayo, taken from McParlan's Statistical Survey of the County of Mayo, 1802.

A Statistical Survey Of The County Mayo by James McParlan, a medical doctor, was published in 1802 for the Dublin Society (later the Royal Dublin Society) and includes a dedication to the 1st Marquess of Sligo, John Browne, 3rd Earl of Altamont, a major landlord in Connaught at the turn of the 19th century. The survey is a snapshot of all aspects of County Mayo , including its topography, geography, farming conditions and practises, livestock, crops, living conditions, wages, religious practises and much more.

County Mayo and the Connaught region generally were known for poor land in comparison to Leinster and Munster . Historically the O'Malley, O'Dowd and many other Gaelic clans had ruled the region since ancient times. The 12th century Norman conquest resulted in the region becoming the domain of the De Burgh or Burke dynasty. Following the Cromwellian invasion and the Williamite Wars of the 17th century, Anglo-Irish Protestant landowning dynasties replaced the Catholic Gaelic Irish and the Old English aristocrats. The Browne family based at a magnificent mansion called Westport House ruled an enormous estate across much of County Mayo and beyond.

Life in early 19th century Mayo was miserable for the Catholic Gaelic Irish tenant farmers and landless peasants who survived on a basic diet of potatoes. During the 17th and 18th centuries there were a series of crop failures which caused repeated famines. Tenants were forced to pay exorbitant rents to their landlords as well as tithes to the established Anglican Church regardless of their religion. During the 1798 rebellion, a French military expedition assisted Irish rebels in creating the short-lived Republic of Connaught before they were defeated by a much larger British army in County Longford . The high sheriff of Mayo, Denis Browne MP, a brother of the 3rd Earl Altamont led a brutal crackdown against the local Catholic population.

The increasing population and deteriorating living conditions for the Catholic poor in the early 19th century led to the Great Irish Potato Famine of the 1840s. County Mayo was particularly affected with whole areas becoming depopulated due to starvation, disease and mass emigration. Howe Browne, 2nd Marquess of Sligo, a liberal, spent Ł50,000 of his own money trying to alleviate their suffering and campaigned tirelessly for British government assistance.

By the late 19th century, the tenants and peasants became organised by the Land League and the Irish Parliamentary Party in a campaign of agrarian agitation that culminated in the passage of land reform legislation that secured their rights. By the early 20th century, the now bankrupted landlords, including the Brownes, had been bought out and the estates broken up. However the Mayo region would remain economically underdeveloped and continued to suffer mass emigration for decades after Irish independence in 1922.

Previous - Knox: The History of the County of Mayo
Next - Meath