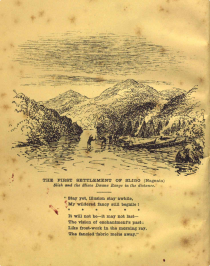 The First Settlement of Sligo. Illustration taken from the first volume of Wood-Martin's History of Sligo, 1882.

The First Settlement of Sligo. Illustration taken from the first volume of Wood-Martin's History of Sligo, 1882.

History of Sligo County and Town by William George Wood-Martin (1847-1917) published between 1882 and 1892 in three volumes tells the story of the region from ancient times until the late 19th century.

The prehistory of Sligo is inseparable from ancient mythology. Early Christian historians attempted to construct a narrative that linked the first waves of people to arrive in Ireland with the descendants of the Biblical deluge. The Milesians, said to have come from Spain , allegedly defeated a mythical race called the Tuatha De Danaan and were the ancestors of the Gaelic Irish. The area has numerous Stone Age graves and monuments demonstrating that the area was civilised for thousands of years.

The Ë Conchobhair Sligigh were Lords of Sligo until the 17th century but were subjects of the O'Donnells of Tryconnell and the Norman Burke dynasty who arrived in the 12th century. The medieval town of Sligo grew up around a castle built there in 1245 by Maurice Fitzpatrick who was later killed in battle. The castle was demolished by the O'Donnells in 1516 and never rebuilt.

By the 16th century English control in Ireland had shrunk to an area known as the Pale around the city of Dublin on the east coast. The Burkes of Connaught had adopted Gaelic language and customs and intermarried with allied Gaelic clans. During the 16th century English Reformation, both the Old English and Gaelic Irish refused to renounce their Catholicism. Prompt by their disobedience and rebellion the English Tudor monarchs began planting Protestant settlers in Ireland .

In 1602 the Gaelic Irish were defeated at Kinsale and the Gaelic Earls of Tyrconnell and Tyrone fled to the European continent and the Plantation of Ulster began in 1609 under James I. Sligo became the refuge for the displaced Irish and in 1641 an uprising in Ulster led to the brief rule of the Catholic Confederacy based in Kilkennyáover two thirds of the country. The town of Sligo was burned by Sir Frederick Hamilton in 1642. In 1649 Oliver Cromwell fresh from victory in the English Civil War invaded Ireland and subdued the country by 1653. In the late 17th century the Gaelic Irish and Old English Catholic supported the Catholic King James II but were again defeated at the Battle of the Boyne in 1690.

The Catholics of County Sligo were reduced to the status of tenants and landless labourers as a result of the penal laws that persecuted them economically, politically and religiously. An Anglo-Irish Protestant landowning class descended from the planters controlled the area. In 1798 the oppressed Catholics inspired by the American and French revolutions supported the United Irishmen rebellion. The British defeat of a military expedition led by the French General Humbert during the short-lived ' Republic of Connaught ' was followed by brutal reprisals against the Catholic populace.

In the 1840s it is estimated that one million Irish died of hunger and disease and another million emigrated after repeated failures of the potato crop. Large areas of Sligo were depopulated as emigrants fled to America . Landlords in Sligo evicted thousands of their tenants during the height of the catastrophe. Later in the century a resurgence of Irish nationalism, in the form of the Fenians, the Land League and the Irish Parliamentary Party, led to an intense campaign for land reform to secure the rights of tenant farmers. The estates of the landlords eventually became bankrupt, were broken up and sold to their tenants.

In the early 20th century the peaceful democratic drive for Irish Home Rule mutated into the Irish War of Independence 1919-1922 followed by the Irish Civil War 1922-23 between rival republican factions. Countess Constance Markievicz, a daughter of the aristocratic Anglo-Irish Gore Booth family who owned Lissadell House, County Sligo , was a republican rebel leader during the 1916 Easter Rising. Markievicz became the first elected female member of the British House of Commons and the first female Irish government minister. However following Irish independence County Sligo like the rest of Ireland continued to experience waves of emigration and decades of economic deprivation.

William George Wood-Martin's parents were members of the wealthy Wood and Martin landowning families who had lived in Sligo since the 17th century. He was educated at home before joining the 24th Regiment and marrying Francis Dora Robinson in 1873 with whom he had six children. In 1877 he became Sheriff of Sligo while writing history works and pursuing his interest in archaeology. He became a member of the Royal Irish Academy and the Royal Historical and Archaeological Association. He died in 1917.